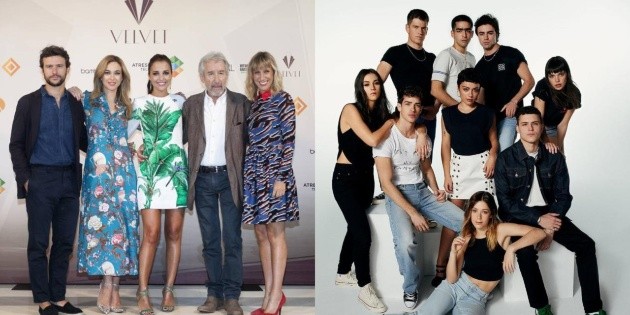 The only relationship that exists between Velvet and Elite is that both were made in high society in Spain. However, its plot and even its historical connotation is very different from each other: the first, set in the Gran Vía in Madrid in 1958 and the second in the Las Encinas school, which opened its doors in 2018 to start the adolescent series that best combined drama, sex, action and youth problems.


And now, with its fourth season just released, Elite became the hit of Netflix again. Although, the most striking thing about this edition is that the series renewed half of its cast leaving behind Danna Paola, Mina El Hammani and Ester Exposito, who said goodbye to Las Encinas last season to give way to Manu Ríos, Pol Granch, Carla Díaz and Martina Cariddi to play the new characters.

However, who also joined this new season is someone who unites, almost without waiting for it. Elite with Velvet. This is Diego Martín, who plays Benjamín Blanco in the recently released strip and is, in addition, the father of Patrick, Ari and Mencía, who is the new director of the school, who forced them to return to Spain to support him in this new project: from being the CEO of companies and becoming a director.

But, Diego Martín’s face was not new to many since, A few years ago he was also part of Velvet giving life to Enrique Otegui, the brother-in-law of Alberto Márquez (Miguel Ángel Silvestre) and director of the Velvet Galleries. During his time in the period series, the actor showed a character with great impetus, but at the same time, dominated by fear of his father and even his younger sister.

In fact, those same characteristics are what define Benjamin in Elite: a man with drive and control over his students, but with a lax handling of three of the most special: his children. What’s more, Mencía is the one who most complicates his level of authority for the character in the series.