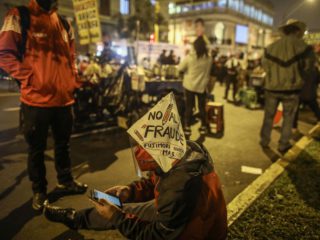 With the vote count nearing its end, the victory of candidate Pedro Castillo seems imminent. The leftist leads Keiko Fujimori in just over 70,000 ballots. In a normalized setting, Castillo would appear on the balcony in a few days and wave his palm hat as a sign of victory in front of his followers, who have been sleeping outside in the streets of Lima since Sunday. However, this moment has nothing in common. This is the most momentous moment in the recent history of Peru. Fujimori has not accepted the results and has asked to review 800 minutes that could extend the outcome for two more weeks, according to electoral experts consulted. What can happen at that time in a country that has experienced great political instability in the last five years is a real unknown.

Peru has one of the most transparent electoral systems in the world. The results of the 86,000 tables placed throughout its vast territory are uploaded scanned to the website of the electoral office. These minutes are signed by the auditors of each party, by officials and supervisors. If the team of candidates is not satisfied with any of them, they can request their review or directly challenge it. The first instance of the electoral court, the National Elections Jury, evaluates the complaint, an act that is broadcast these days live by streaming, and determines if the record is valid or not. If the candidate continues to be dissatisfied, he can raise the claim to the second instance, the plenary session of the National Elections Jury, which has the last word. Being such a guarantee system, your walk is slow.

During the first 24 hours the computation was fast because the minutes came from the cities. When reaching 95% on Tuesday, the tables from the jungle and mountains and the votes from abroad began to be counted. The count slowed down. The electoral authority in turn reviewed the minutes about which the auditors raised doubts. That process will end in the next few days and its immediate winner is Castillo, who has already been congratulated by other presidents of the region, such as Argentina’s Alberto Fernández, or other former leaders such as Lula da Silva.

But Fujimori has delayed that moment, at least 15 days. The conservative policy, which in turn faces the request of a prosecutor to enter prison for the Odebrecht case, advised by an army of lawyers from the best law firms in Lima, has requested the annulment of 800 tables – for now, the request for 620-, those in which Castillo got the most votes. That would reverse, in theory, the result. Fujimori publicly exposed on Monday, when he glimpsed his defeat, false news and montages that circulate on social networks to support the fraud. Later, on Wednesday, he appeared again to discuss a plan orchestrated by Castillo with very flimsy evidence, which the electoral system can solve without major problems. This thesis maintains that Castillo’s party, which has trouble organizing a press conference, precisely executed a conspiracy involving hundreds of people to circumvent the system.

“I have never seen an accusation like this,” says Fernando Tuesta, former head of the National Office of Electoral Processes, the body that organizes the elections. He was in charge of carrying out those of the year 2000, after Alberto Fujimori, Keiko’s autocratic father, fixed the previous ones. “Two weeks of terror come to us. There is going to be a campaign against the official bodies, they are going to want to whisper the armed forces. Millions of people will believe in fraud ”.

The political scientist and director of noticiasser.pe, Javier Torres, adds that this way of acting is typical of Fujimori. “What is now is a process to demonstrate two things. One, to cancel the process generating a situation of uncertainty and calling for mobilization. And two, leave the doubt that Castillo won with fraud ”.

International observers congratulated Peru for organizing Election Day. In none of his reports does he speak of irregularities. Fujimori, however, has encouraged his followers to continue in the streets. This strategy similar to that of Donald Trump in the United States ended with the assault on the Capitol in Washington, where five people died. The consequences in Peru, after a very tense campaign that has divided family and friends, remains to be seen.