The serpents, heirs of the survivors of the end of the dinosaurs 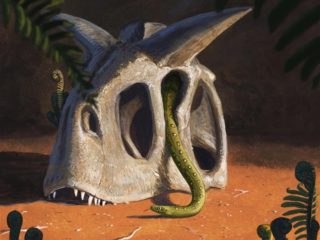 Science Writing, Sep 14 (EFE) .- The more than 4,000 living species of snakes all have a common ancestor and evolved from the handful of species that managed to survive the meteorite that wiped out the dinosaurs and most of the living beings a few years ago 66 million years ago, at the end of the Cretaceous.

The devastation generated by that impact was also a kind of “creative destruction” that allowed snakes to diversify into new niches, previously occupied by their competitors, suggests a study led by the University of Bath (UK) published today by Nature Communications.

The British and German team studied fossils and analyzed genetic differences between modern snakes to reconstruct their evolution, which helped pinpoint when those we know today evolved.

The results suggest that all living snakes can be traced back to just a handful of species that survived the impact of that large asteroid.

The snakes’ ability to shelter underground and go long periods without food helped them survive the destructive effects of the impact, the authors say.

Once their competitors became extinct, which includes Cretaceous snakes and dinosaurs, they were able to occupy new niches, move to other habitats and began to diversify, giving rise to lineages such as snakes, cobras or boas.

The fossils also show a posteriori change in the shape of the vertebrae of the snakes, as a consequence of the extinction of the Cretaceous lineages and the appearance of new groups, such as the giant sea snakes up to 10 meters in length.

One of the research authors Catherine Klein highlighted the “extraordinary” of snakes, not only for surviving a mass extinction, but because “in a few million years” they were already innovating and using their habitats in new ways.

The study suggests that snakes began to spread around the world around this time and, although the common ancestor to all of them probably lived somewhere in the southern hemisphere, they appear to have spread to Asia for the first time after the extinction.