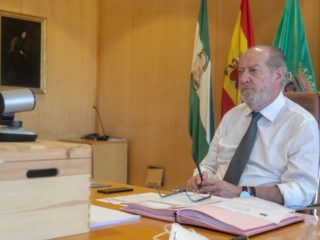 The PSOE continues to squander public funds to enforce so-called non-sexist language. So much so, that the President of the Diputación de Sevilla, Fernando Rodriguez Villalobos, has promoted a plan to train the staff of the aforementioned Provincial Council in the use of non-sexist language.

Inside of the II Company Equality Plan, from the Public Employee Area the celebration of nine editions of this course, aimed at training the staff of the Provincial Council of Seville in the use of non-sexist language for administrative tasks, with the primary objective “To make women present in official documents and legal texts.”

Taught by the journalist and researcher Bianca Sánchez Gutiérrez, this training also aims to contextualize and understand the social construction of gender unequally, eradicate socially constructed gender stereotypes and understand the importance of language policies within equality plans, he detailed in a press release.

The course is made up of five modules dedicated to language as an integrating element, to administrative language and linguistic sexism, to the main problems of the sexist uses of language and the resources for a non-sexist use of language, in addition to offering a decalogue to achieve this end.

In the II Company Equality Plan several measures are collected in this regard. Specifically, in Axis 1 relative to Business Culture, in Area 2.1, relative to Internal Communication Systems, in Measure 1.2.1, reference is made to the use of a non-sexist, visual and written language, both in the preparation of administrative and informative documents, as well as in the corporate website and in the recruitment announcements, «reviewing in any case the language used and modifying it, as far as possible, in order to use a neutral language and not sexist ».

Some uses of language in the administrative field may be sexist for the simple fact of not presenting women and men in an inclusive way in communication, «So it is necessary to rethink certain exclusionary or discriminatory habits that have become naturalized in administrative communication and that, subtly, hide, subordinate or they treat women and men unequally, building a reality that is neither representative nor equitable.

Regarding this new action in favor of gender equality, the President of the Provincial Council, Fernando Rodríguez Villalobos, has indicated that «it is about one more bet of this institution in our commitment to give maximum visibility to women; language is the instrument for
means of which we express our thoughts, our ideas and our way of conceiving the world, therefore if we want the use of our language to adapt to the changes demanded by today’s society, one of the aspects that we must take into account is the use non-discriminatory language on grounds of sex, so that men and women are represented equally ”.

She is currently doing her doctoral thesis on advertising and feminism in the Interuniversity Doctoral Program in Communication at the Universities of Cádiz, Huelva, Malaga and Seville, activity that combines with the publication of articles, book chapters and communications in international scientific congresses.

She has also coordinated books on communication and gender, and has participated as a guest lecturer in different entities and professional associations, in addition to her role as a trainer on non-sexist language that she has been developing in different public entities.