The SpaceX capsule successfully docked with the International Space Station 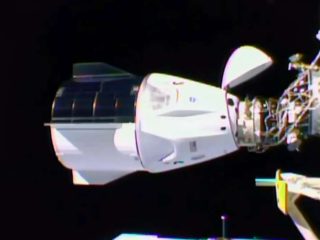 The space capsule that the private company SpaceX sent on its first manned operational mission, it successfully docked in the early hours of this Tuesday at the International Space Station (ISS), reported the US agency (NASA) on its Twitter account.

The four astronauts traveling in the capsule of the Dragon spacecraft are already inside the ISS, the Americans Shannon Walker, Michael Hopkins and Victor Glover, and the Japanese Soichi Noguchi, according to NASA.

The crew of the ISS issued a welcome message to the four astronauts of the capsule called “Resilience” upon arrival, through social networks, where the coupling was broadcast live.

After the hatch was opened, the four astronauts joined the crew in the ISS orbiting laboratory. The arrival occurred at 11 a.m. EDT (04.01 GMT).

“The hatches are open. Crew 1 astronauts Shannon Walker, @Astro_Soichi, @AstroVicGlover and @Astro_illini are the newest residents aboard the @ Space Station. Welcome aboard! ”, Confirmed from NASA.

The ship had successfully taken off from Cape Canaveral (Florida) last Sunday in a reusable Falcon 9 rocket with the Dragon capsule on top.

At around 7:40 p.m. local time (0040 GMT on Monday), the Resilience capsule was finally in orbit towards the ISS.

The SpaceX firm founded by the businessman Elon Musk it intends to use that part of the rocket for the next mission in partnership with NASA to the ISS, which is scheduled to take place in March next year.

Which is the first of at least six missions that SpaceX will carry out to the ISS because of a 2.6 billion dollar contract signed with NASA In 2014, it finally managed to take off according to the planned schedule, without setbacks and after a series of postponements of the scheduled date.

The Dragon capsule is the first privately owned and operated spacecraft which is certified by NASA for manned space flight, after the success of the Demo-2 test mission that with two astronauts on board took off last May for the ISS and returned to Earth without incident on August 2.

The start of these manned missions means for NASA the possibility of embarking on regular missions to the ISS, and even for its programs to the Moon and Mars, in association with private companies in charge of building and designing spacecraft and rockets, which will function as a kind of space “taxis”.