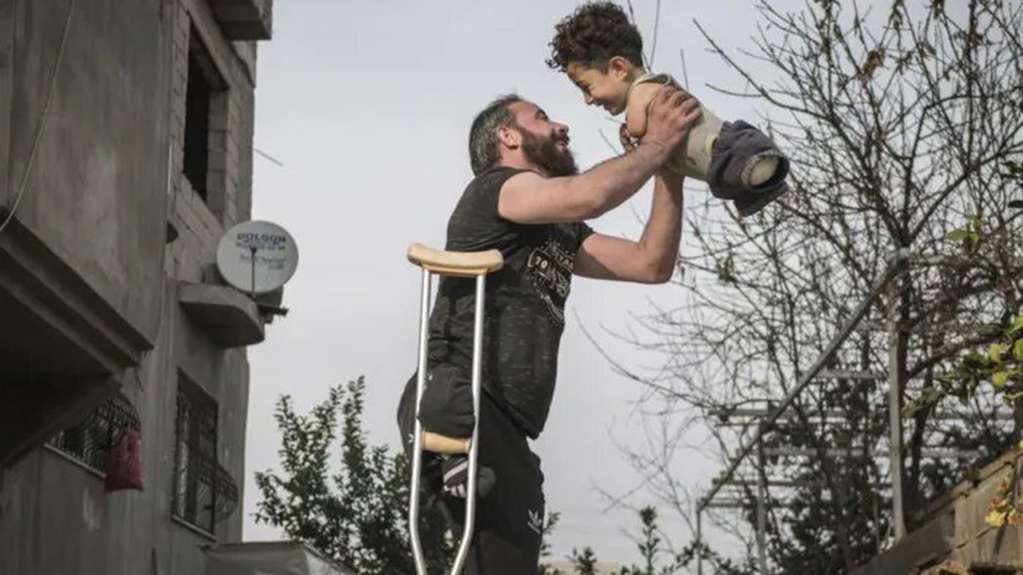 The story behind the photo chosen as image of the year: the smiles of a father and a son that cover the horror of the war in Syria

Manzur al-Nazzai he balances his left leg firmly on the floor. He only appears to lean lightly on his crutch and the smile that flows spontaneously folds to the frank laugh of his son Mustafa. The little boy, born without legs or arms, seems to fly supported by the hands of his father, mutilated from the Syrian civil war.

It is a typical family image that, for an instant captured in the lens of the Turkish photographer Mehmet Aslan, makes us forget the tragedy of a war that caused almost half a million deaths.

The photo was considered the image of the year 2021 by the Siena International Photo Awards. Entitled “Hardship of life”, the photograph has already gone around the world and even reached the pages of The Washington Post.

“We wanted to draw attention to this drama,” explained Aslan, specifying the objective of the image, which, ultimately, was always to help the child.

Who is Manzur al-Nazzai, the man behind the photo of Mehmet Aslan

The family of Manzur al-Nazzai He fled Syria three years ago and lives, along with thousands of his compatriots, in southern Turkey, in a border area. Musfatá has an older sister. They all live in a tent in a refugee camp.

Mustafa was born with a malformation caused by his mother’s ingestion of drugs, also affected by toxic gases during the fighting in the Idlib region, in northwestern Syria.

The 5-year-old boy needs continuous medical attention and special electronic prostheses. His father explained: “I swear I toured all the hospitals, all the towns, but I did not achieve anything.” That response did not reach the health centers in his war-torn country, or those in Turkey. And your concern grows day by day.

His mother, Zeinab, contributed: “That photo reached the whole world. We tried for years to make ourselves heard to help my son with treatments. We will do everything to give him a better life, “he said.

What is the Siena International Photo Awards

Aslan’s photo was awarded at the Siena International Photo Awards, a renowned photography contest created in 2014 in Italy for photography professionals and amateurs from all over the world.

The international jury is made up of international photographers, editors and collectors from different countries. The photo of Aslam moved the jury who decided to award the prestigious annual award to the image of Manzur and his son Mustafa while playing and smiling, at least for a while, away from the horrors of war.