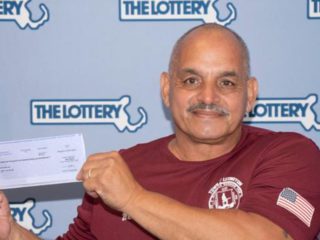 A grand prize from the lottery it changes anyone’s life. There are those who decide to flaunt it in style with luxurious purchases and others prefer to keep a low profile or even anonymous while considering how to organize their lives. There are also those who donate a part to charitable causes and others look at the family and try to give everything they could not.

Who will also change his life is Juan McFaline, a resident of the town of Lowell, in the state of Massachusetts (United States) who got rich overnight after winning a million dollars in the Massachusetts State Lottery. An amount that well managed can allow you to avoid having to work during the rest of your days and guarantee a good future for your family.

Juan, as soon as he discovered that he had earned such an amount of money, thought of his family. To be more specific, on his seven grandchildren. AND he imagined enjoying himself with them at Disney World, at least that’s how he let the lottery officials know, according to Masslive. The lucky man chose to collect his prize in cash. He received a payment of $ 650,000 before taxes and was presented a check for $ 461,500.

The store where Juan purchased the winning ticket will also receive a commission of $ 10,000. Almost 200 people made a million dollars or more in the Massachusetts State Lottery last year, including prizes of up to $ 15 million. Massachusetts lottery players should also verify older tickets. Millions of dollars in unclaimed prizes remain.