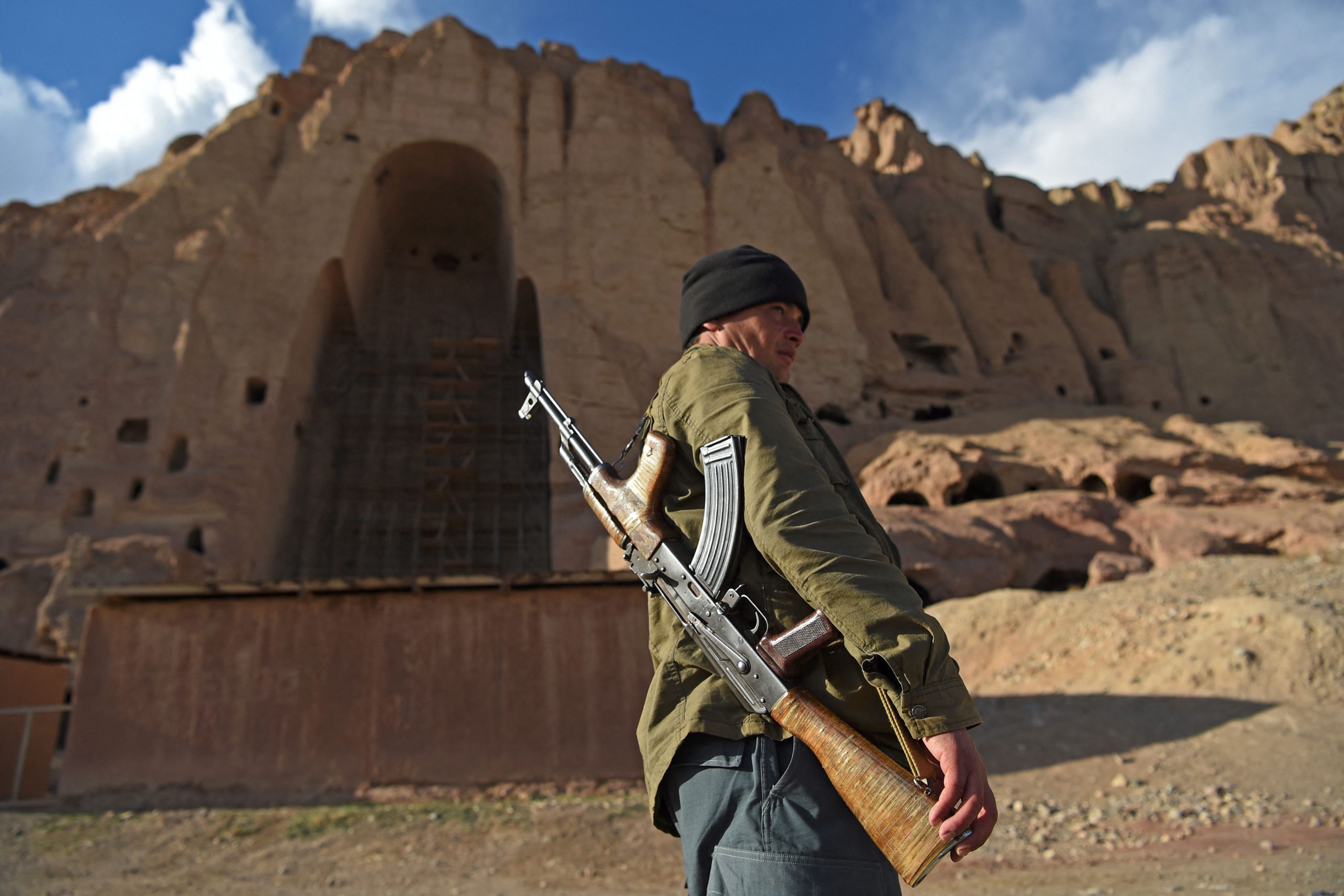 The Taliban, under the shadow of the blasting of the Giant Buddhas

From the windows of the unfinished Bamiyan Cultural Center there is a spectacular view of the hollows where the Giant Buddhas stood until the Taliban dynamited them in March 2001. In the shadow of those scars, and of the archaeological wealth of the valley in which are found, the BCC emerged, as the project is known by its acronym in English. After several delays, the inauguration was scheduled before the end of the year. The return of the fundamentalists to power has raised a big question mark about the future of the BCC and the cultural heritage of Afghanistan in general. For now, they want to block the glass.

The same day they entered Bamiyan, on August 15, the Taliban reported to the center, which is next to a barracks, now empty. “They came in badly, asking us to hand over our weapons,” recalls Nematullah Timori, the young engineer who is in charge of the work and who lives with other employees on the site. “I told them we didn’t have any and they wanted to know what this was. I showed it to them and when they saw that we were installing the amphitheater’s sound system, the first thing they asked me was if it was to organize dances, ”he says, still incredulous. “I tried to convince them that it was for reading the Koran.”

In another visit, the head of the party told him that they should “build a wall” in front of the window from which the niches where one day the Giant Buddhas were can be seen. The two monuments carved in the 6th century on a cliff in the Bamiyan Valley, 175 kilometers from Kabul, were testimony that Afghanistan was a crossroads of ancient civilizations. Although Buddhism was no longer practiced here for centuries, the Hazara (and Shiite) population, the majority in the area, were proud of that legacy and appreciated the occasional tourism it attracted.

Concerned by the recurrent visits by the militants, Timori went to see the Taliban governor, Hal Mohammad Anas, to find out what to expect. “He told me that we could continue with the project,” he says. But where there should be two hundred workers in action, only a dozen have shown up for work, and they do so without enthusiasm. “Many have left the country or are at home because they are afraid. Those who continue to come say that it is not worth it, that the Taliban are not going to let us inaugurate, ”he explains.

He himself doubts what will be the end of an effort that started in 2016 promoted by UNESCO and to which he has dedicated the last three years. Of the six managers that appear in the photo of the last BCC Facebook post, on August 23, only Timori remains. “We are all very afraid. I’m not leaving because I made the commitment to finish this, ”admits the engineer, who is from Herat and whose family is asking him to come home. A couple of years ago, the Taliban murdered two of his uncles who worked as translators.

The blasting of the Great Buddhas drew global attention to the Islamist extremism of the Taliban, half a year before their al Qaeda guests carried out the 9/11 attacks. With the regime change brought by the US intervention, Unesco promoted projects that would help preserve the local culture and unite a society highly divided by ethnicities and creeds. The BCC competition was won in 2014 by the Argentine studio M2R arquitectos and has been possible thanks to funding from South Korea.

Due to the precedents, the return of the Taliban has alarmed those concerned with heritage preservation. Unesco Director Audrey Azoulay has called for “the diversity of Afghanistan’s cultural heritage to be preserved and for all necessary precautions to be taken to protect it from damage and looting.” The president of the International Council of Museums (Icom), Alberto Garlandini, has warned of the danger faced by “the men and women who have dedicated their lives to preserving the country’s treasures.” The UN Special Rapporteur for Cultural Rights, Karima Bennoune, urges cultural and educational institutions around the world to protect them.

In the Bamiyan bazaar, merchants and customers agree that their main concern is not who is in charge, but that there is work. With civil servants unemployed and the wealthiest on the run, business has plummeted. The BCC was not only a source of pride, but also a source of income for many families. Stone from the valley’s quarries and local labor have been used. In the same enclosure, a skating school has been completed to offer entertainment to the young people of the area. Everything is frozen.

Since the Taliban took power, international aid, including to the BCC, which had already been short of funds since last March, has been cut off. Donors want to see which path the fundamentalists take. Last February they said that the vestiges of Afghanistan were part of “the history, identity and rich culture” of the country and that “everyone has an obligation to protect and preserve them.” A person in charge of the Culture Commission has assured this Thursday that all the international agreements signed regarding the protection of historical monuments will be respected. It is not clear if all factions share that position. In fact, there are beginning to be worrying signs.

In Bamiyan itself, residents accuse fundamentalists of having toppled the statue of the martyr Mazari, a Hazara leader who was assassinated during his previous dictatorship (1996-2001). At the roundabout he was in, the pedestal is now empty. A provincial government official told the agency France Presse that the militiamen also destroyed some instruments and art objects from the Department of Culture. And whatever the governor says, his troops keep repeating to the BCC workers daily that they are building “a Buddhist building”, something the radicals consider anathema.

Even if their ideology has not changed, the need for international recognition may force them to be cautious in their gestures. They know the world is watching. Destruction of cultural heritage has been considered a war crime since 2016. For now, the absence of fighting in most of the country has prevented damage. But the autonomy that Taliban officials enjoy in each province increases the risk of heritage looting as a form of financing.

The last time the Taliban were in power, they not only destroyed the Buddhas of Bamiyan, but also looted the National Museum in Kabul, particularly its pre-Islamic remains. Fortunately, the 22,000 pieces of gold that make up the Bactrian Treasury were kept safe in a central bank vault. Since 2006, part of that legacy has been on display in a dozen countries, until last February it was first made available to Afghans at the Presidential Palace. Now the Taliban are looking for him.
Ahmadullah Wasiq, deputy head of the Cultural Commission of the Taliban government, said Thursday that they are looking for these first century BC jewels. “If it has been taken out of the country, it is a betrayal of Afghanistan. We are investigating it, ”he was quoted as saying by ToloNews. According to Wasiq, the National Museum, the National Archive, the National Gallery and the historical monuments are safe.
The Kabul Museum has been closed for a month and a half, making it impossible to verify its status. Although over the past two decades different cultural institutions around the world have collaborated with Afghanistan to research and document its heritage, only a third of the museum’s holdings are cataloged, increasing the risk that objects may be diverted to the black market.
In 2001, days before the blowing up of the Buddhas, the Taliban publicized the destruction of a hundred statuettes from various museums and archaeological sites across the country. However, archaeological sources considered that the fatwa against icons decreed in February by Sheikh Omar was a simple cover to hide a lucrative business selling archaeological pieces, many of which could be bought in the antique markets of Peshawar (Pakistan ). After that exercise in iconoclasm, an Archaeologists Without Borders mission found only the remains of some clay pots and some tiny figurines of birds whose heads had been cut off.