The Timón Awards recognize the cream of the Balearic boat 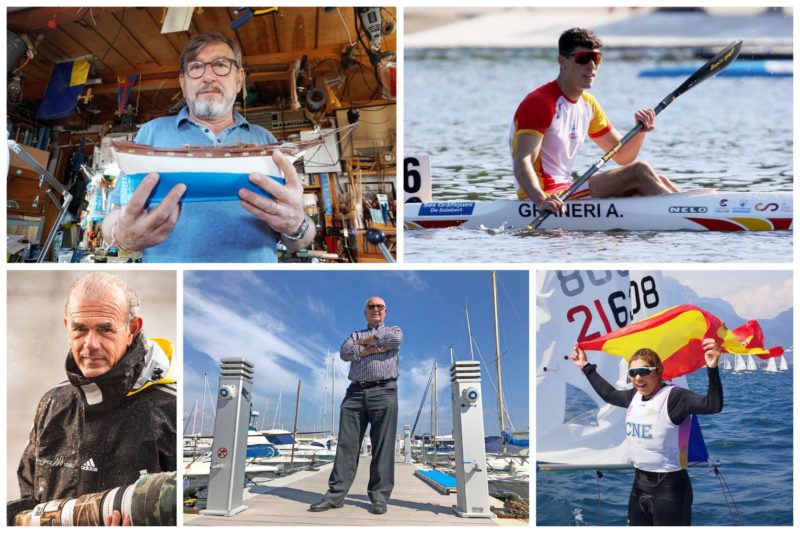 The Gaceta Náutica Timón Awards reach their sixth consolidated edition as the benchmark awards in Balearic sailing. The winners of the year 2021 are a new example of the great potential of nautical sports and business and associative initiative in the Islands, as well as the commitment of this publication to maritime culture and heritage.

Marga Perelló (Sail), Alex Graneri (Canoeing), Association of Friends of the Maritime Museum (Entity), Nico Martinez (Communication) and Miquel Suñer (Trajectory) join the list of illustrious winners of some awards that were born in 2016 with the aim of recognizing the work of the most outstanding personalities and athletes in Balearic sailing, and at the same time serve as an impetus for the development of this sector, making excellence and innovation visible.

All of them have stood out for their good international sporting results or for accumulating professional careers that have contributed to the defense of sea users, heritage or the dissemination of sailing beyond their own sphere of influence.

Marga Perelló (Club Nàutic s’Estanyol), winner of the Timón de Vela Award, is one of the great promises of Balearic sailing after having become, at just 15 years old, in world champion and European runner-up ILCA 6 class U17s. His coaches and mentors predict a promising future and highlight his innate qualities for sailing. Marga gave her first boards at the Club Nàutic Can Picafort sailing school. At s’Estanyol, the club for which he now competes, his talent and ability to compete at the highest level did not go unnoticed. Today she is, both by track record and by projection, the best sailor in the 50-year history of this small sports entity in the municipality of Llucmajor.

Alex Graneri (Real Club Náutico de Palma), winner of the Timón de Canoeing Award, which some already see as a descendant of the double Olympic medalist Marcus Cooper (Timón 2016), treasures the same qualities. its victory in the junior world championships at distances K1-1000 and K1-500 they place him, in fact, as one of the best junior paddlers in the history of Spain. He currently trains at the CEAR in La Cartuja (Seville) and dreams of participating in some Olympic games. Graneri lives by and for canoeing, a sport he came to “by chance” through the Palma Nautico summer school. “My mother signed up for my sister and me one summer because she didn’t know where to leave us while she worked,” she recalls.

The Timón Award for the best Entity this year went to the Association of Friends of the Maritime Museum of Mallorca, and very particularly to its president, Manuel Gomez Planas, and in its late founder, Javier Pastor Quijada, two figures without whom it would be impossible to know the naval heritage of the Islands. The tireless work of this humble association has made possible the creation of the current Maritime Museum of Mallorca and the conservation of numerous heritage vessels that, had it not been for the direct intervention of Manuel Gómez, would have disappeared.

Photographer Nico Martínez will collect the Timón de Comunicación Award for his long professional career and his contribution to spreading the sport of sailing. Nico, whose first experience with regattas dates back to the 1975 Princesa Sofía, has covered three editions of the America’s Cup, is an official photographer for several professional sailing world circuits and has published in the main magazines of the field.

MIQUEL SUÑER, THE SAGE OF NAUTICS

The 2021 Brújula Award, a special category aimed at recognizing personal trajectories that have marked the course of Balearic sailing, has been awarded to Miquel Suñer, former president of the Club Nàutic Sa Ràpita and the Association of Nautical Clubs of the Balearic Islands (ACNB), undoubtedly one of the most respected and loved personalities in the sports and recreational boating sector.

The Balearic Port Authority (APB) and Gaceta Náutica will award a sixth Timón Prize endowed with 2,000 euros to the best idea linked to technological advancement that has been projected or implemented in any port of the Balearic Islands in the course of this year. The winner will be announced on December 2. The deadline for submitting proposals ended on November 29. The award will be presented by the president of the APB, Francesc Antich, during the 6th Timón Awards gala organized by Gaceta Náutica and which will take place on December 9, at 7:30 p.m., in the conference room of the Chamber of Começ de Mallorca. Entry with invitation.