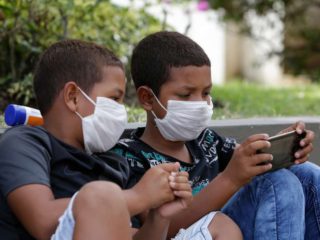 Although the number of deaths from coronavirus in the United States remains low, in recent days a new concern has arisen in the scientific community in that country: a sharp increase in Covid-19 cases in children.

The American Academy of Pediatrics (AAP) reported Tuesday that there were more than 23,550 infections in minors between July 8 and 15, almost double what had been recorded at the end of June.

Although children without comorbidities usually have the disease without serious symptoms, the problem is that are a source of spread of the virus. In addition, the contagious Delta variant could aggravate some conditions among the very young, many of whom are not yet old enough to be vaccinated.

In this sense, the AAP urged the authorities to advance with the inoculation in that age range. For the moment, the only vaccine authorized for use in children between 12 and 17 years of age is the one from Pfizer-BioNTech. Meanwhile, for children under 12 years of age there is still no approved vaccine in the world, but Moderna and Pfizer are conducting clinical trials. It is expected that they can begin to apply them by the end of the year.

“So many people, unvaccinated individuals, are getting Delta that children are being swept away with it, and I think this will make things very difficult as the school year begins,” he said. Peter Hotez, dean of the National School of Tropical Medicine at Baylor College of Medicine.

The director of the Centers for Disease Control and Prevention (CDC), Rochelle Walensky, said at a hearing of the Senate Health, Education, Work and Pensions Commission that the risk that children run from the threat of contracting Covid should be taken “more seriously”.

“I think that we fall into this erroneous thinking of saying that only 400 of these 600,000 deaths from COVID-19 have been in children”He warned. “Children are not supposed to die. So 400 is a huge amount for the respiratory season, ”he said.

On the other hand, the AAP published a new guide recommending the universal use of chinstraps in schools for all people aged 2 years and over, including adolescents who have been vaccinated. Instead, the CDC recommended that only the unvaccinated should wear face masks indoors.

Official data indicates that of approximately 25 million adolescents between the ages of 12 and 17 in the United States, approximately 8.9 million have started their vaccination scheme against Covid.

Meanwhile, the delta variant already represents 83% percent of infections in the country, a “drastic increase” in a few days that coincides with a boom in coronavirus deaths of nearly 48% in the past week in the country.

In areas of the country where vaccination rates are lower, “the percentage” of cases of the delta variant, more contagious and detected for the first time in India, “is still higher” than 83%, he added.

The official recalled that, in those areas of the country with fewer vaccinated, “infections and hospitalizations are rising again,” and in the last week there has been an average of 239 deaths per day, “an increase of almost 48% compared to to the previous week ”.

“The most disheartening thing is that most of these deaths could be prevented with a simple vaccine, which is safe and available ”, he stressed.

With information from agencies.