The unpublished videos of “Cantora”, by Mercedes Sosa, with Charly, Spinetta, Cerati and Fito, among others, are released 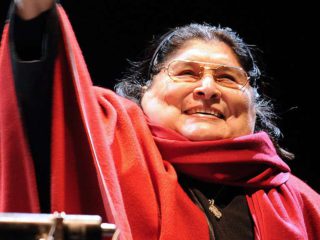 It is an outstanding work by Mercedes Sosa, which had the participation of Joan Manuel Serrat, Caetano Veloso, Charly Garcia, Luis Alberto Spinetta, Charly García, Fito Páez, Gustavo Santaolalla, and León Gieco, among others. The admiration of these artists was reflected in Singer, his latest studio album. A review of the popular songbook, surrounded by icons of Ibero-American music.

Since yesterday, and for a month, they will be uploaded on the artist’s YouTube channel, for the first time, 21 videos featuring songs from the legendary album from the remembered singer, originally released in 2009.

A work that summarizes the international scope of his voice and the respect of artists of all musical genres, not only Argentine folklore, which was his specialty. On the album, we can enjoy duets with Joan Manuel Serrat, Caetano Veloso, Shakira, Jorge Drexler, René Pérez (from Calle 13), Lila Downs, Joaquín Sabina, Julieta Venegas, Franco de Vita, Diego Torres, and Daniela Mercury. In addition, the participation of important national rock figures such as Gustavo Cerati, Gustavo Santaolalla, Charly García, Fito Páez, León Gieco, Pedro Aznar and Vicentico.

From that original film material, with the meeting with the artists, these were recorded 21 videos with the complete songs, next to each guest. To date, what could be seen on YouTube were only partial sections, in the documentary “An intimate journey”, with scenes from Cantora’s recordings.

In those subjects -34 in total- that are part of the work Singer, we can hear wonders like “Disarm and bleed”With Charly. “It is an adorable version for his followers. Very beautiful ”, described“ La Negra ”. “I love that you sing the part of the melody in the middle,” Maestro García replied during the recording.

“He is one of the few people who has the idea of ​​the nation, the group, the tribe, and he hangs out with songwriters and singers of other genres. It revealed the story in a very modern and vital way. She is more a nation than the political class, “he defined Fito Paez while recording “Zamba del cielo”, on the DVD of Singer. Participate accompanied by Liliana Herrero.

“Mud maybe “, together with Luis Alberto Spinetta, is another of the great moments of this work. “If I don’t sing what I feel, I’m going to die inside”, Mercedes sings with her imprint. It thrills. “Hug you, hold you close, and know that you trust me. She sings a phrase and we directly die. He sings it with something that nobody has, “summarized” El Flaco. “

There was also room for the theme “Zone of promises”by Gustavo Cerati. “What a particular voice you have Gustavo“Mercedes told him during the recording of the Soda Stereo song. “It is a very heartfelt thing. A song that came out shot, written and composed very quickly and with a lot of emotion. It must be the only song in which I name my mother ”, replied the musician.

Mercedes Sosa’s career developed within Argentine folklore, where she gave voice to the so-called boom New Songbook and then to Latin American song in general, with exquisite versions of compositions by Violeta Parra, Milton Nascimento and Silvio Rodríguez. He became a true international figure, capable of filling auditoriums in Europe, Australia, the United States and all of Latin America.

During the dictatorship military of the ’70s, He suffered exile and lived in Madrid and Paris, but when he returned in 1982, his figure grew larger and he won the admiration of a new generation of fans. In those days, he incorporated songs by Argentine rock artists into his repertoire and even dared to sing tango. There, a magnificent stage began, with songs by prestigious authors from around the world and joining great figures such as Luciano Pavarotti and the classical concert artist Martha Argerich.

Over the years, he had many accolades and received all kinds of awards and honorable mentions, for example, the UNIFEM Award of the United Nations, or be an Ambassador of UNICEF. She was the winner of four Grammys Latinos and a Grammy for Musical Excellence.

Singer He shows it in all its fullness, encouraging itself to break down barriers and prejudices, demonstrating the unifying and healing power of music.

Zamba to forget you – Diego Torres and Facundo Ramírez

Nothing – María Graña and Leopoldo Federico

The angel of the bicycle – Gustavo Cordera

And so and so – Luciano Pereyra

I will never forget you – Marcela Morelo

Knowing about the barefoot – Julieta Venegas

Hymn of my heart – León Gieco