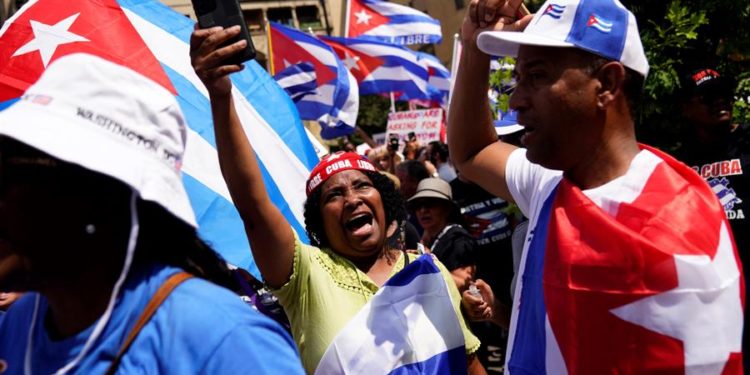 Brazil, Colombia, Ecuador, Guatemala and Honduras represented Latin America in a call that was made to the Cuban communist regime promoted by the United States, through its Secretary of State, Antony Blinken, so that the Castro dictatorship “respects the rights and freedoms legally guaranteed by the Cuban people “, as well as” release the detainees for exercising their right to peaceful protests. “

In total, 20 nations signed this release managed from Washington that stands on the side of the Cuban people, which after several days of demonstrations has not calmed down, but is roaring for the end of the tyranny. South Korea, known for being a distinctive ally of the United States, was the only country in Asia. From Europe they supported Austria, Poland and Greece. However, it can also be seen that Spain is on the list of those who oppose the repression that is taking place in Cuba.

The lukewarm attitude of the Spanish government, led by the socialist Pedro Sánchez, towards the Cuban regime adds to the series of actions that are perceived as a clear alignment with the Castro dictatorship. His file reveals that this is not a mere coincidence.

For example, Pedro Sánchez was the first Spanish president to visit the island in 32 years, when the socialist reached La Moncloa. At that time, he had a meeting with Díaz-Canel, but did not meet with the Cuban dissidence, the newspaper reported at the time. The world. There he negotiated the postponement of the payment of the debt of 300 million euros that Cuba owed to around 300 Spanish companies.

Likewise, in the last two years the Government of Pedro Sánchez sold to Cuba at least 50,792 euros in weapons of police repression, according to the Spanish export statistics of “Defense material, other material and dual-use products and technologies “, in accordance with OkDiary.

In this regard, the Spanish media clarified that only in 2019 the Government sold the communist regime 48,292 euros in “pistols and their ammunition for the Police and ammunition for revolvers and shotguns for the Armed Forces,” while in 2020, through the Secretariat of State for Foreign Trade, authorized the export of “revolvers and automatic pistols” as defense material to the Cuban regime. The amount registered for said shipment is 2,500 euros.

This pattern on the part of Spain has also been evidenced by previous administrations. In 2016 alone, including interest, Spain forgiven Cuba a debt of 1,492 million euros. In parallel to saving that money, the government of Mariano Rajoy promised to invest 375 million euros to finance economic and social development projects with the participation of Spanish companies, reported The world.

Although Sánchez has used the benefits of language to disguise his position in the face of the repression exercised by the Castro regime against an unarmed population, he still does not condemn these events. Instead, the PSOE secretary limited himself to saying in an address that “it is evident that Cuba is not a democracy,” while spokespersons that Podemos are part of his government, such as the new spokesperson Isabel Rodríguez or the vice president Nadia Calviño, they refused to point out that Cuba was a dictatorship, as also explained OkDiary.

However, today, nations that serve as vital allies of Washington are demonstrating against the sad authoritarian legacy left by Fidel Castro, which was also extended by his brother Raúl and finally Miguel Díaz-Canel. These twenty countries put an end to Internet restrictions and hear the claim of their population.

“We urge the Cuban government to heed the voices and demands of the Cuban people. “The international community will not waver in its support for the Cuban people and all those who defend the basic freedoms that everyone deserves,” the statement added.

The US and its crusade to confront the Castro dictatorship

The Cuban dictatorship currently has the population isolated in a certain way, due to the internet cut-off on the island. By definition, socialism implies the means of production are in the hands of the revolution. So this service is managed from the State. Each citizen has an account assigned with his name.

As an issuer, the one-party government, the Communist Party, has the power to deny its citizens access to the Internet. In the digital age, it is unusual for a government to have so much power. But in Cuba it is real, not only food rationing, but also Internet access.

In response to these actions, the Biden government imposed sanctions on the Cuban Defense Minister to restore Internet access and allow Cuban-Americans to send money to their families without the government expropriating part of it. Meanwhile, crowds are coming to the White House to demand more pressure against the communist regime.

US President Joe Biden has pointed out that neither socialism nor communism are desirable systems and has lashed out at the regime in Cuba. However, he will have to face how within his own party he has promoters of these ideologies, with Bernie Sanders and Alexandria Ocasio Cortez being the most prominent.

What’s more, when Biden called Nicolás Maduro a dictator, he had to face his own voters who consider him a democratically elected leader. For now, the civil uprising in Cuba will serve to make regional politicians transparent and their vision regarding what is happening in countries impoverished by socialism.