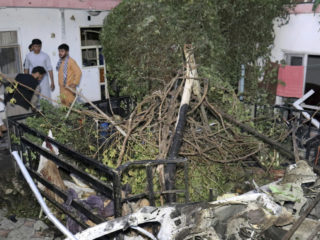 The Pentagon has declined to comment on the recent revelation that its drone strike in the Afghan capital killed not a terrorist, but an Afghan humanitarian worker and several children. Without giving details, he insists on affirming that this action was to avoid an “imminent attack” to the American airlift.

Days ago, the US Army claimed to have killed on August 27 three alleged members of the terrorist group Islamic State of Greater Khorasan, also known as ISIS-K, in Nangarhar province, and a “facilitator” of the attack. organization in Kabul on August 29. The first attack would have been in response to the attacks on August 26 near the Kabul airport, for which ISIS-K claimed responsibility, while the second, according to Washington, was to prevent a new car bomb attack. .

However, this Monday the spokesman for the Department of Defense, John Kirby, admitted that it could not confirm the identity of the people killed by the drones, nor could it explain how the US Army could investigate the second incident without having any presence in the area, after its troops left the country.

“The Central Command assessment is ongoing, and I will not anticipate it. The attack was carried out to prevent an imminent attack on the airport,” Kirby insisted, without further details, in response to a journalist’s question about recent research published by The New York Times.

The newspaper’s report, released last Friday, asserts that the man who lost his life was actually a peaceful Afghan citizen, identified as Zemari Ahmadi, who worked for an American NGO, and not the driver of a car bomb, as Washington claimed. The action also caused the death of nine members of the victim’s family, seven of them children.

The investigation showed that Ahmadi’s purpose that day was actually to transport colleagues to and from their workplaces, while an analysis of security camera video revealed that what he loaded into his vehicle they were containers of water and not explosives. The Pentagon officials themselves admitted that at the time of the attack they did not know the identity of the driver, but considered him a suspect.