The US will give 500 million vaccines, “inflated” figures in Brazil and other keys 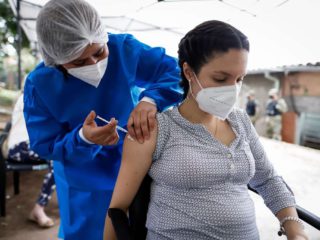 International Drafting, Jun 9 (EFE) .- The United States, which continues to lead in infections and deaths from covid-19, has as a mission in the next two years to distribute 500 million Pfizer / BioNTech vaccines, which it hopes to deliver closely out of 100 countries and, while this is happening, President Jair Bolsonaro insists that the number of deaths from the virus in Brazil is “inflated.”

This and four other pieces of news make up the keys to vaccination this week in America:

A TOTAL OF 500 MILLION VACCINES FOR 100 COUNTRIES

This is the goal of the United States after the White House reached an agreement to buy 500 million vaccines against covid-19 from Pfizer / BioNTech that it expects to deliver to about 100 countries in the next two years, an announcement that is expected to be made. US President Joe Biden in his participation in the G7 this weekend, according to The New York Times.

Biden said this Wednesday before boarding the presidential plane to the United Kingdom, where the G7 meeting will take place, that he had a global vaccination strategy that he would present at the summit, which joins his announcement last month that he will distribute 80 millions of vaccines, most of it through Covax.

Vaccination continues throughout the world and according to the Johns Hopkins University map, 2,206 million vaccines have been inoculated so far, of which 497.8 million have been administered in America (282.1 million first doses and 171 million 3 million second doses), according to the Pan American Health Organization (PAHO).

2. “INFLATED” DATA OF DEATHS FROM COVID IN BRAZIL?

Again, the president of Brazil Jair Bolsonaro insisted that the data on deaths from covid-19 in his country are “inflated”, ensuring that, in reality, the country may be “one of those with the lowest death rate. per inhabitant “in the world.

Without presenting any evidence and citing an alleged document from the Union Court of Accounts (TCU), the State’s control body that has already issued a denial on this matter, Bolsonaro denied the 475,000 deaths from coronavirus from the official statistics and reiterated that the real figure “should be” 50% smaller.

Colombia already adds two lethal months of the third peak of covid-19 and this Tuesday, in a risky bid to revive the economy, restrictions on closed sectors were lifted since the beginning of the pandemic, such as nightlife and sporting events with presence of public.

With more than 500 daily deaths and historical highs of new infections, the country accumulates 3,611,602 infections and 92,923 deaths and despite the optimism of some for the reactivation, the scientific, academic and medical community called on the Government to “delay” the reopening throughout the country as it can reach the figure of 800 deaths per day.

The population between 12 and 17 years old in Uruguay began their vaccination process against covid-19, making the country the first in Latin America to inoculate minors due to this pandemic.

As announced by President Luis Lacalle Pou, during an interview on Channel 10 on June 1, young people will receive the vaccine from the US laboratory Pfizer to expand the immunization process of the population.

5. VACCINES FOR PREGNANT WOMEN IN PARAGUAY

Paraguay began this Wednesday the vaccination of pregnant women while it continues to accumulate deaths (10,145) and infections (379,131) from the covid and oxygen is scarce in health centers.

Pregnant women, over 18 years of age and with more than 20 weeks of gestation, will receive the 99,600 doses of Moderna that arrived this weekend as the first part of a total donation of 400,000 vaccines from Qatar.

The director of the Rosario airport (Argentina) Eduardo Romagnoli reported that the 32 respirators donated to the hometown by footballer Leo Messi, through the foundation that bears his name, have been stranded in the terminal for ten months.

“The respirators are technical ventilation equipment, they arrived in August. They are preserved in the Rosario Islas Malvinas International Airport and in the best way,” Romagnoli told the TN channel. Given the situation, the only one that can authorize the entry of these teams is the National Administration of Drugs, Food and Medical Technology (Anmat), “he explained.