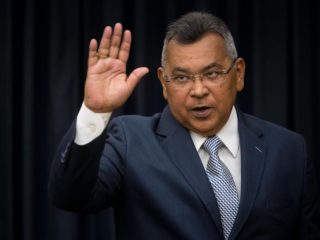 Caracas, Sep 12 (EFE) .- The Minister of Electric Power of Venezuela, Néstor Reverol, assured this Sunday that the national electricity system suffered a new “attack” that caused power cuts in Caracas and other states of the Caribbean country.

“We want to report on a new attack on the national electricity system, within this permanent sabotage plan and that is part of the multiform war that we have constantly received and that one of the important aspects of this multiform war is the electrical war,” said the minister through a phone call to the state channel VTV.

Reverol pointed out that there was a “terrorist attack” in the electrical substation located in the Lamas municipality of Aragua state.

“In Aragua state we have a loss of 75 megawatts and we are waiting to assess the damage to the substation,” he added.

Likewise, he said that the Aragua firefighters “acted efficiently” and that his office is making “all the necessary arrangements to quickly put this substation into operation.”

Users on social networks have reported several power failures during the afternoon of Sunday and the beginning of the night and some cities in the country such as Maturín, San Juan de los Morros, Punto Fijo and Margarita do not have electricity service at the moment.

At the beginning of August, the Committee for Those Affected by Blackouts assured local media that this year 96,291 electrical failures have been reported and 37,986 devices have been damaged.

Venezuelan government officials constantly allege that the power cuts are part of a sabotage plan.

This Saturday, the executive vice president, Delcy Rodríguez, said that “evidence” of the “electrical sabotage” of 2019 will be shown, when the Caribbean nation experienced a national blackout that lasted almost a week.