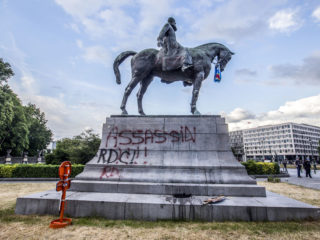 It took the French state 50 years to recognize that it was its police forces, and not the Nazis, who carried out the mass deportations of Jews in France. Jacques Chirac broke that taboo in 1995. “There are moments in the life of a nation,” exclaimed the then conservative French president, “that hurt the memory and the idea that a country makes of itself.” However, it took another 16 years for France to recognize a crime that it had committed long before: it was not until the 21st century when, thanks to the Taubira Law, the State, through Parliament, apologized for slavery, abolished in 1848.

The norm is named after the deputy of Guyana Christiane Taubira, who in 1999 presented a bill for the National Assembly to recognize as a crime against humanity “the transatlantic slave trade and slavery, perpetrated from the 15th century by the European powers against the African populations deported to Europe, America and the Indian Ocean ”. It was approved in 2001, a century and a half after abolition.

While the debate over responsibility for the horrors of World War II underwent a major shift in the late 1960s – German Chancellor Willy Brandt became knelt before the monument to the victims of the Warsaw Ghetto on December 7, 1970 in a gesture that symbolizes that process – the open discussion on the crimes of colonization has taken longer to arrive, driven, among other things, by the Black Lives Matter movement in the United States, but also by the need to establish a new relationship with the former colonies.

Germany has just recognized as genocide the mass murder, between 1904 and 1908, of the Hereros and Nama in present-day Namibia and has promised reparations of 1.1 billion euros, which have been received with considerable skepticism in this country on the west coast. African. Around the same time, French President Emmanuel Macron recognized the sinister role his country played in the 1994 Rwandan genocide under Socialist President François Mitterrand. He spoke of “overwhelming responsibility” in a crime against humanity, whose executors received the silence, if not the support, of the French State that was moved by old colonial reflections.

“This is a major movement, a change of course,” explains José Luis Villacañas, professor of Philosophy at the Complutense University of Madrid, who has studied the colonial empire of Spain, a country that lost its main overseas territories long before than the rest of the European powers. “European colonialism has been the subject of deep intellectual criticism by Eurocentrism and imperialism. Under these conditions, not exceeding that stage in which Europe was the center of the world results in a foreign policy that is not very operational in areas where China has entered, which presents itself as a non-imperialist country. If Europe wants to win softpower it has to get rid of that colonial past, against which the current African leaders have fought ”.

Celeste Muñoz Martínez, professor of African history at the Autonomous University of Barcelona, ​​who is part of the European Observatory of Memories, in which he deals with the area of ​​slavery and colonialism, relates this turn in many countries to the upheaval represented by the Black Lives Matter movement, unleashed in the United States by police violence against blacks, because it made visible the racism that still exists today. it exists in many western societies as an undigested remnant of the ideologies that sparked colonialism and slavery.

“Black Lives Matter has prompted a reflection on the origin of this racism,” says Muñoz Martínez. “The main reaction was to attack monuments of colonialism, appealing to the place that colonial and slave memory occupies in public space”; This researcher continues, pointing out, for example, the removal of the statue of the Marqués de Comillas in Barcelona. In other cases, such as the statues of King Leopold in Belgium, they were vandalized. “In Europe the most important issues are now compensation, although what they will be like has not yet been completed. We do not know to whom they will be distributed, or with what criteria. Another issue is the return of the looted patrimony ”, continues this researcher.

Slavery and colonialism are two connected and, at the same time, different processes. In America they are closely related because between the fifteenth and nineteenth centuries this territory received millions of human beings uprooted from Africa to work until death on its plantations. However, the colonialism of the 19th and 20th centuries took place when slavery was already abolished, although it was driven by racist thinking (as can be clearly seen in Hergé’s first album, Tintin in the Congo). “It is based on ideologies of dehumanization and civilization”, explains Muñoz Martínez, “which argued that it was carried out for the benefit of the populations that were colonized. It is a speech that allowed establishing racial hierarchies ”.

Belgium, with the recognition of the crimes of King Leopold in Congo, which inspired the great novel by Joseph Conrad Heart of Darkness, was the pioneer, with a change of attitude towards the past, symbolized in the radical transformation that the Royal African Museum underwent turned into AfrikaMuseum: from a purely colonial museum it became an exhibition on colonialism. Book, The ghost of King Leopold, Adam Hochschild’s, which was rejected by 10 publishers before becoming an international hit in the early 2000s, helped spark this change. The Netherlands, the United Kingdom and the United States are immersed in similar processes of reflection on the past. Plaques begin to appear in ports where the slave trade took place, such as in La Rochelle (France), the narrative of museums changes or new ones are inaugurated and a debate has been opened on the restitution of objects resulting from colonial looting (Germany has pledged to return the so-called Bronzes of Benin, while a report commissioned by Macron ruled in favor of returning African art).

However, there is still a long way to go, as is clear from the rise of far-right parties that display clearly racist discourses without complex. Professor Muñoz Martínez recalls the scandal that occurred in England when it was learned that in 2015 they finally finished paying compensation to slave owners for the abolition of 1835, while reparations have never been contemplated for the descendants of slaves (who had contributed with their taxes to pay those reparations to the families of those who were able to enslave their ancestors).

Many descendants of those who suffered from colonialism (and who in many cases still suffer from racism) believe that this process has only just begun. Haitian-born French-based filmmaker Raoul Peck, who just premiered the series on HBO Exterminate all the savages on the horrors of colonialism, he recently pointed out in an interview with this newspaper: “Europe is still in denial. I would not put all European countries in the same bag, but it is clear that when we watch television, when we read the newspapers, I have the clear impression that a large part of Europe is in denial. When we allow ourselves to criticize a part of this past, it is always done with certain nuances, we recognize that yes, it is true, that we did it, but we are forced to explain it. And we think that this does not give the right to do this or to burn down the ghettos. So there is no real deep analysis of colonization. “