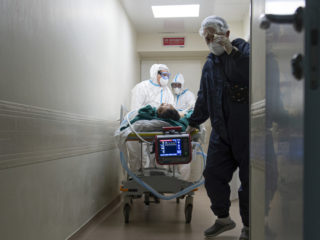 The director general of the World Health Organization (WHO), Tedros Adhanom Ghebreyesus, has warned of the possible appearance of new variants of coronavirus that could be “even more dangerous than the Delta.” So he claimed this Wednesday in a speech during the 138th session of the International Olympic Committee.

“The more transmission, more variants will emerge with the potential to be even more dangerous than the Delta variant, which is causing so much devastation right now. And the more variants, the greater the probability that one of them avoid vaccines and take us all back to the starting point, “said the head of the international organization. In this sense, he insisted that no one can feel safe” until everyone let’s be safe“.

In addition to lamenting the inability worldwide to share vaccines and ensure that they are administered, not only in rich income countries, but also in the poorest, Tedros recalled that vaccination is not the only effective method to fight the virus. .

“Many countries have shown and are showing that this virus can be controlled with the right mix of social and public health measuresif they are applied carefully and consistently, “he said.

The director of the WHO listed public and individual tools to combat covid-19 such as carrying out tests to detect positives, contact tracing, quarantine, masks or doing the greatest number of outdoor activities, among others. The fulfillment or not of these measures can “make the difference between life and death“, he stressed.

In addition, he stressed that if the pandemic forced the holding of the Olympic Games in Tokyo to be postponed, “it has not beaten them.”

Meanwhile, the head of the organizing committee of the Olympic Games. of Tokyo 2020, Toshiro Muto, did not rule out the cancellation of the sporting event at the last minute if there were an upturn in infections due to the disease among athletes and other accredited persons. The Tokyo 2020 Olympic Games are scheduled to start this Friday and are developed without the presence of the public.