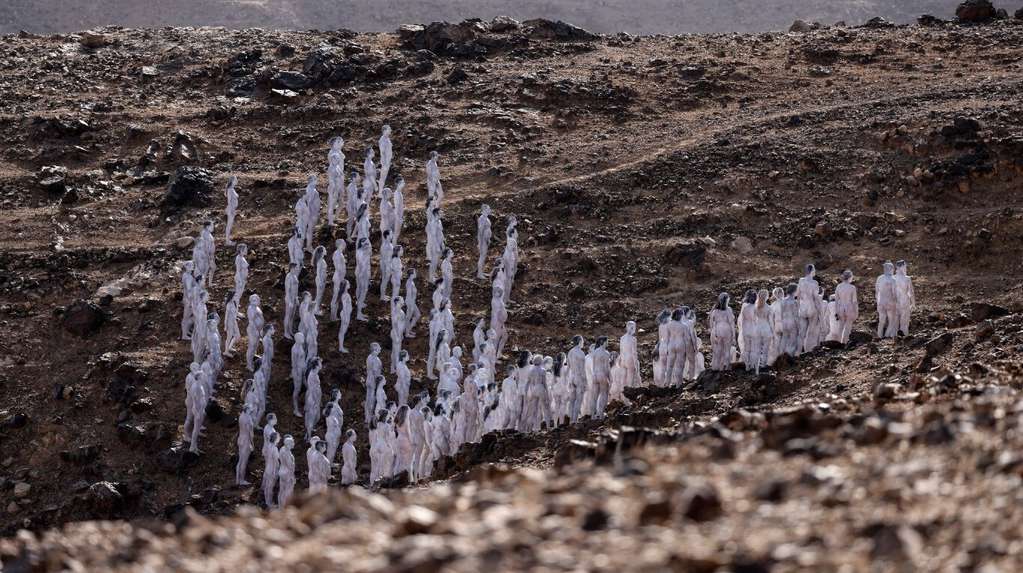 These 200 people got naked to save the Dead Sea

The American Photographer Spencer Tunick, known for his massive compositions of nudes in natural settings, performed this Sunday a new “performance” at the Dead Sea with 200 people without clothes and wrapped in white paint to raise awareness of the need to preserve this salty lake, considered the lowest point on the planet’s mainland.

The new installation was carried out ten years after a similar one in that same salty lagoon whose shore is 435 meters below sea level. The Dead Sea is located between Israel, the West Bank (Palestine) and Jordan.

The new “performance” had the participation of 200 people, between 19 and 70 years old, all painted white, in the middle of the desert landscape that surrounds the Israeli city of Arad, the gateway to the lagoon.

There Tunick emulated the construction of a “human pipe” that would flow into this salty lake that suffers from serious environmental problems.

”My purpose is to raise awareness about the Dead Sea, which is disappearingdo. We must find a way to maintain sea level or bring fresh water, without affecting the water supply of the surrounding countries. Water is life ”, Tunick pointed out after making this new photographic installation in Arad.

A biblical allegory in the camera lens

The installation is the third that the American photographer has made in the Dead Sea after bringing together more than 1,200 participants in 2011 floating on the Minerals beach, which was no longer accessible due to subsidence in the ground, and a smaller one that he immortalized with his camera in 2016.

”We have included fewer people than ten years ago. It is a more conceptual work, in which I have turned people, painted white, into columns of salt, an allegory of the biblical story of Lot (turned to stone as punishment). Although here they are all alive, representing pillars of salt that spring from the springs from under the salty water ”, said the artist.

The Dead Sea, a salty lake that gets smaller every year

Tunick’s latest Dead Sea project aims to draw attention to sinkholes and wells that have been cropping up around the salt lake in recent years, caused by salt deposits that accumulate as the waters recede.

The Dead Sea descends at a rate of more than one meter a year.

Because of those holes in the ground, many beaches that surround the lagoon were totally inaccessible. To solve this problem, two options are studied: a channel that emanates water from the Red Sea or another from the Mediterranean, an idea that Tunick evokes with this “human pipe”.

The 54-year-old photographer thanked the participants, whom he described as “true warriors of art and adventurers”, for their contribution to this new work dedicated to the Dead Sea.