They discover tens of thousands of bones, including human remains, in a cave inhabited by hyenas during the last 7,000 years 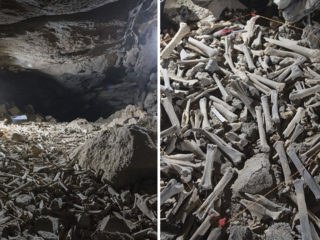 An international group of researchers discovered in the desert region of Haret Bani Rashid, in northwestern Saudi Arabia, a lava tube that has served as a refuge for hyenas (‘Hyaena hyaena’) for millennia and contains tens of thousands of bones of various animal species, including human skulls.

According to his study, published Recently in the journal Archaeological and Anthropological Sciences, the team of archaeologists found the immense deposit of bones while conducting research work in the cavernous system known as Umm Jirsan, which, according to the results of radiocarbon dating tests, has been inhabited by hyenas by the last 7.000 years.

Although the cavern was discovered in 2017, the grunting that came from within prevented scientists from venturing into its interior, showing that the site continues to be inhabited to this day.

During their work, the academics analyzed a total of 1,917 bones and teeth recovered from the interior of the cave, of which, about half could be related to 40 different animal species, such as horses, donkeys, camels, goats and gazelles, among others, and even the top of three human skulls.

The taphological analyzes of the remains found suggest that the hyenas transported the entire bodies of their smaller prey into the cave, while the larger animals were separated into pieces and only the parts with the highest nutritional value were taken.

Hyenas are known scavengers that feed on practically any animal, which they dismember with their powerful jaws, capable of crushing bones with ease. Also, their powerful digestive system allows them to digest parts of the body of their prey that most animals could not assimilate, such as hooves, fur, antlers, ligaments or others.