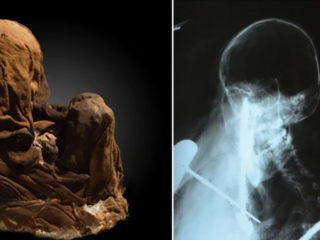 An international team of archaeologists has uncovered some of the secrets of the human sacrifices that the Incas performed in their religious ceremonies more than 500 years ago, according to a new study. published en la revista Archaeological and Anthropological Sciences.

The researchers determined that for rituals of the ‘Capacocha’, one of the most important in the Inca Empire, the priests offered to the Ampato and Pichu-Pichu volcanoes, in the Peruvian department of Arequipa, to well-developed children and adolescents, characterized by their beauty and purity.

To that end, ‘chosen’ minors are prepared since birth through a upbringing and special feeding, and by the time they were to be delivered to the gods they had to consume concoctions that made them go into a trance. The Incas believed that the deities would like this type of human sacrifice and in return they would grant blessings and prosperity.

Age and sex of the ‘chosen’

Scientists studied the remains of five people, found in ceremonial areas a more than 5,000 meters high, on the summits of Ampato and Pichu-Pichu. The analyzes of those frozen remains and partially mummified determined that they corresponded to minors between three and seven years of age, mostly girls.

In addition, it was concluded that the victims of these sacrifices previously had privileged positions and came from the upper social classes, since they were well fed and had an adequate growth rate, in comparison with the minors of lower social strata.