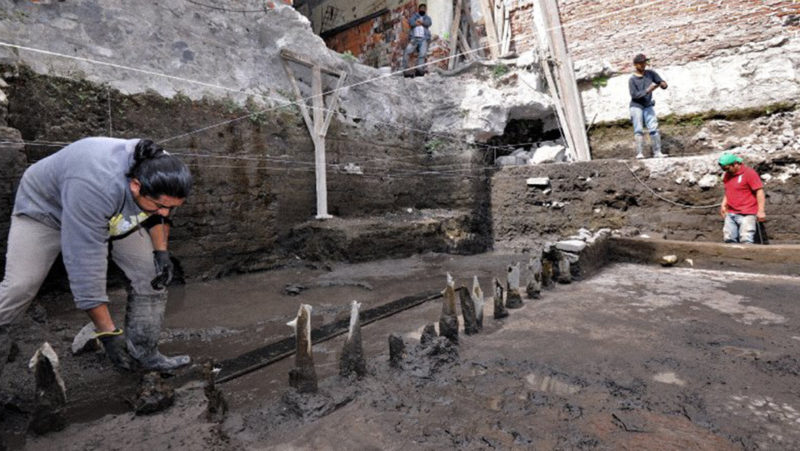 Mexican archaeologists found an altar that dates from the 16th century in a property next to the emblematic Plaza Garibaldi, famous because mariachi groups meet there, in the north-central part of the Historic Center of Mexico City, reported the National Institute of Anthropology and History (INAH).

Although the information was released this week, the discovery occurred last August. According to the INAH, the altar possibly dated between 1521 and 1610; But, in any case, it dates back to some time after the fall of Tenochtitlan (August 13, 1521) by the Spanish troops of Hernán Cortés, a fact that gave way to the colonial era or viceroyalty for 300 years.

According to the institution, the place of the discovery “was the home of a Mexica family – indigenous people who lived in the Valley of Mexico – that survived the Spanish invasion”, where “the inhabitants of that old domestic unit performed a ritual […] to give testimony that this was the end of a cycle of their lives and of their civilization. “

Among the found are the elements of an offering, which includes a pot with skeletal remains (human ashes) and 13 polychrome incense burners almost one meter long, used to burn the resin.

The INAH also lists as part of the offering a pulque cup with a tripod base, five bowls and a plate; Furthermore, it points out that four vessels were placed as a lid on the pot in which the cremated bone remains were found.

The offering was located just over four meters deep and was covered with several layers of “well consolidated” adobe. The INAH points out that this was “to keep it out of the eyes of others” and it is precisely what “the mettle of those Mexica who remained in Tenochtitlan after the taking of the city by Hernán Cortés indicates.”

The discovery occurred when the Mexico City Housing Institute (INVI) was carrying out work for a deep foundation and the installation of a pair of cisterns; the finding was immediately reported to INAH. After that, during the last three months, the archaeologists carried out the excavations.

In addition to the elements found, the excavation revealed that the space of that house was made up of an interior patio – where the offering was located -, a room and a corridor that connects five rooms that still maintain part of their original stucco floors and on walls.

The coordinator of these archaeological rescue tasks, Mara Abigaíl Becerra Amezcua, said that this discovery is significant within the framework of the “500 years of indigenous resistance,” as declared in 2021 in Mexico.