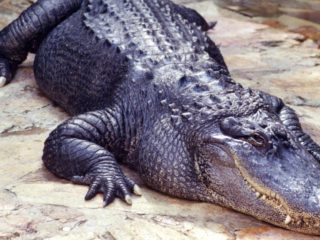 After capturing a huge four meter crocodile long, hunter John Hamilton took it to Shane’s Red Antler processing plant in Yazoo City (Mississippi, USA) to have it dissected. And what was found inside left everyone surprised.

Shane Smith, owner of the plant, said he was examining the stomach of the saurian, over 340 kilos, and discovered two unusual objects: an arrowhead and a plumb bob (a heavy instrument shaped like a teardrop) that historians say were stones used by Native Americans thousands of years ago.

On the Facebook page of Red Antler they spread the discovery with a message: “We have been cutting a few large crocodiles to see what was in their stomach. So far they have all had something great there. But the four-meter crocodile brought in today by John Hamilton produced the surprise of the year. “

Smith initially speculated that the alligator may have eaten an arrow that someone had shot at it, but that was not the case. Then he thought that it was probably something that was lying around and that the reptile ate in an attempt to aid in digestion, since these animals sometimes swallow stones to break the harder pieces of the bones that they ingest, according to commented a Clarion Ledger.

James Starnes, director of surface geology for the Mississippi Department of Environmental Quality, examined a photo of the arrowhead and determined that the object is not exactly that. It is the tip of a primitive weapon probably 5,000 to 6,000 years old., while the plumb line dated from around 1700 BC

Already used at that time in fishing to weigh nets, the object is made of hematite or ferric oxide. Still, despite its classic teardrop shape, Starnes isn’t quite sure it’s actually a plumb line.