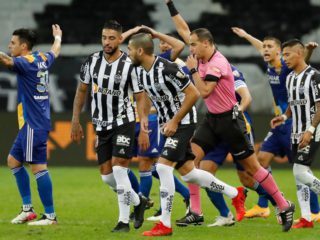 The South American Football Confederation (Conmebol) spread the video and audio of the conversation between the central referee and the VAR of the Boca Juniors – Atlético Mineiro match, in which it was decided to annul a goal of the Argentine team, of course offside, which unleashed chaos at the Mineirao stadium in Belo Horizonte (Brazil).

In the 63rd minute of the match for the second leg of the Copa Libertadores round of 16, the Boca footballer Marcelo Weigandt scored 1-0 with a free throw. The VAR initially reviewed the play for a possible foul against an Atlético defender, which was ruled out. However, they then went on to analyze a supposed forward position from another player from the ‘xeneize’ squad.

After a long analysis of the play, in the VAR they determined that there was a millimeter offside and interference against the goalkeeper of the local team, so they called the central referee to review the images. This agreed with the VAR and annulled the goal by Boca Juniors.

The game closed its regulation time with a tie to 0, so the tie was defined in the penalty shootout, which concluded with a 3-1 victory for the locals, who thus qualified for the quarterfinals.