This is the animated short series Spidey and his super team: musical trailer and first images 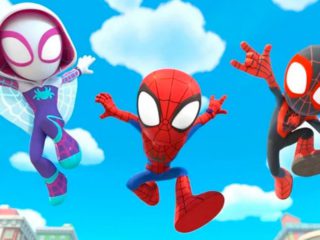 Spidey and his super team (Spidey and His Amazing Friends), Marvel’s new animated short series from Disney Junior which will premiere this July in Disney+ (as the platform progressed recently), presents his first musical trailer to present his new song performed by Patrick Stump from the band Fall Out Boy. And together with this new advance, the first images of some stories directed to the smallest of the house starring the cartoon versions of Peter Parker, Miles Morales Y Gwen Stacy.

Thus, after being announced in 2019 by Disney Junior, we can finally see Marvel’s arachnid superheroes in action in animated version; and it is that together with the main trio other regulars of the House of Ideas will join as Hulk, Black Panther O Ms. Marvel, in addition to villains like Lady Octopus, Green Goblin O Rhino, among others.

As we say, the main musical theme of this first video preview of said series of animated shorts is the work of Patrick Stump, leader of the famous band Fall Out Boy, created and performed by himself. Patrick Stump comments: “I came from decades of being a Marvel nerd. But I said to myself, ‘well, this is probably going to be the first time that many kids of this generation are going to see an iteration of Spider-Man.’ What does that mean? There is so much history behind that ”.

“In my head, I was like, ‘okay, you have cartoons from 60s Spidey, with its surf rock theme. Do you have the 90s cartoon, which has a bit more metal, hard rock. Then there are the scores. There is the score of Danny Elfman, Horner’s and Michael Giacchino’s. ‘ All of those things swirled in my head in a minute, and I sat down and had this explosion of inspiration. Then I had to rush to the studio to record everything. I was very excited at the time, “explains the singer.

Spidey and his super team premieres in Disney+ the next July 16, 2021. We leave you with some of his new images, courtesy of the Entertainment Weekly medium.