This was the life of ‘real life Tarzan’: he died eight years after making contact with civilization 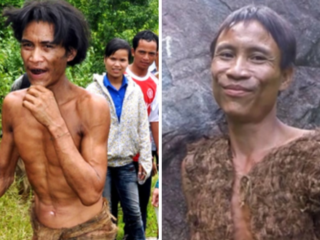 His story went around the world not only for having survived in the middle of a jungle and isolated from civilization for decades, but for being a testimony to the consequences of the Vietnam War, which still weigh on. Ho Van Lang He had survived with his father the American bombings of those years and had hidden in a small hut where he lived for 40 years from what he managed to collect and hunt, in the best style “Tarzan”.

After being “rescued” and adapted to social life eight years ago, last Monday he died as a result of a Liver cancer. The news, in fact, shocked because although isolated in the middle of the jungle he did not know what it was about sharing life with other people, he looked for ways to survive adversity.

His father had managed to escape attacks in the middle of the war and left the desert in 1972, when half his family was killed in the bombings. Over the years, they both believed that the war was never over and it was not until 2013 that they made contact with Vietnamese society by entering a village to ask for help because the father, Lan Ho Van Thanh, he was very ill.

For four decades, men survived the adventures of the jungle. They gathered fruits and cassava and planted corn. In the middle of the forest, they bundled up with what they could and covered themselves with leaves and tree bark like “Loincloth”. A wooden hut was his home, just five meters above the ground. That life in the middle of nature lasted until eight years ago, when some collectors noticed his “strange” way of acting and gave notice to the authorities.

After finding them, the rescue organizers detected that the father could speak in the Cor language, although his son could only pronounce a few words. According to the testimony of a friend of this man, an explorer named Alvaro Cerezo (who lived in the jungle for a week with Ho Van Lang), the fact of having tried to “civilize” him after so many years of living in the jungle, could have been a point against him, with fatal consequences.

“I am very sad to see him go, but for me his death is also a liberation because I know that he has been suffering in recent months,” he said. Cerezo and said that he never liked to see how they sought to adapt man to civilization and modern life: “He had spent his whole life living in the jungle and then he came to live in the civilized world where he began to eat processed foods and sometimes , even to drink alcohol ”.