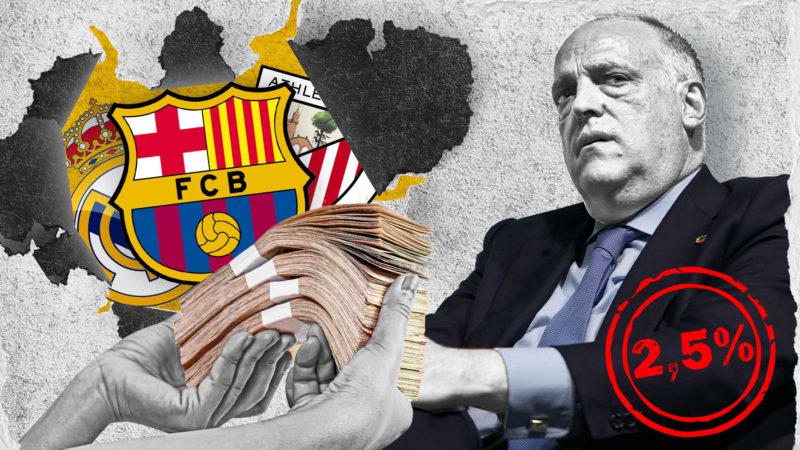 In the next few hours the 42 clubs of First and Second Division they will have on the table a formal offer from three large banks, Merrill Lynch, JP Morgan y HSBC, which improves the conditions of the agreement closed between the League and the investment fund CVC. The proposal is a credit for immediate payment in full and that would be repaid within 25 years with an interest of between 2.5 and 3%.

The offer they have obtained for the rest of the clubs on Real Madrid, the Barcelona and the Athletic CVC improves both in the term and in the interest rate and comes just before the General Assembly of the League put to a vote on December 10 the pact with CVC in an extraordinary session in which it was hoped to get the definitive OK to the operation.

The investment plan of this Impulse League, the euphemism with which the agreement with CVC was baptized, supposes an economic injection of 1,994 million euros with important tolls for the clubs. The big difference between this new proposal made by Real Madrid, Barcelona and Athletic and the agreement of the League lies in the number of years to return the money, which is reduced by half from 50 to 25, and the interest, which would be between five and twenty times less.

Interest payable established with CVC They are 11% that could rise to more than 20% depending on the increase in the audiovisual rights of the League over the years. For its part, the percentage agreed in the new proposal ranges between 2.5 and 3%.

Another big difference is in the payment to the clubs. This last minute offer guarantees the payment of 100% of the agreed amount immediately once the signature takes place. By cons, with CVC the clubs would only have 40% of the money before the end of this year and it would already be late, as the estimated date was October. From there, there would be three payments of 20% in the months of June 2022, 2023 and 2024.

This Wednesday the Delegate Commission of the League unanimously ratified its support for the Impulse League. However, this last minute proposal can radically change the positions of some clubs that should not be mortgaged for the next 50 years as the president of the League intends, Javier Tebas.

Real Madrid, Barcelona and Athletic They have been working for months on an operation that could be a very tough stick for Javier Tebas and the presiding institution. With the offer already in hand, the clubs could get off the boat of CVC and sign an agreement with a valuation and conditions much better than those promised by the employer.

The injection of 1,994 million euros of CVC commits clubs to allocate up to 70% of resources to investments related to infrastructure, international development, brand and product development, communication strategy, innovation and technology plan and content development plan plan on digital platforms and networks social, being able to have up to an additional 15% for the registration of players and the other 15% for financial debt. In contrast, the venture capital fund keeps a 10.95% stake in the company and also a good part of the profits from television rights once the distribution between the clubs has been made.

In the last Assembly of Real Madrid, your president, Florentino Pérez, did not hesitate to explain to his partners the dark aspects of the pact with CVC and how damaging it would be for the clubs to benefit from the pact signed between Javier Tebas and the British venture capital fund. «It is an operation full of very serious irregularities. This fund has already tried and failed in Italy and Germany. The list of irregularities detected by our attorneys was staggering. That is why we act against the president of the League, CVC and the agreement, by civil and criminal means, “he said.

At that moment, Florentino Pérez It was also made available to all clubs to study “legal, reasonable, profitable proposals, without being caught in a fund.” «Today money is worth very little. Why get into this mess? We are willing that the clubs that want to can have reasonable projects. And it is 50 years. It’s stupid. Who knows what this will be like in 50 years? ”He added.

In the middle of last September both the Real Madrid As the Barcelona and the Athletic They have already made the decision to challenge the agreement because they consider that the operation was adopted “within the framework of a notoriously irregular and disrespectful procedure with the minimum required guarantees,” as they explained in a harsh statement.

The clubs now have more than a week to study the proposal before being presented at the Assembly on December 10th.