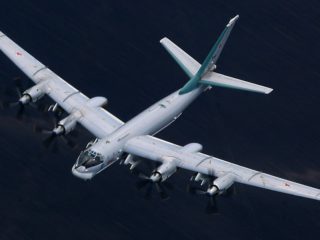 Three Tu-95MS strategic bombers of the Russian Aerospace Forces and two warships of the Pacific Fleet practiced a cruise missile attack against enemy targets during exercises in the central part of the Pacific Ocean, as reported by the Russian Defense Ministry.

A total of more than 20 ships, submarines and support vessels of the Pacific Fleet, as well as more than 20 helicopters and aircraft of the naval aviation of the Russian Fleet and the Russian Aerospace Forces participated in the maneuvers that were carried out to the southeast. from the Kuril Islands from June 7 to 24.

“In the final stage of the exercises, the flagship of the Pacific Fleet, the Variag missile cruiser and the frigate Márshal Sháposhnikov, together with the aircraft of the Russian Aerospace Forces, carried out a simulated attack against enemy targets”, detailed the Russian Defense Ministry.

In addition, three Tu-95MS strategic bombers of the Aerospace Forces took part in the simulated attack, which took off “from the naval aviation airfield of the Pacific Fleet in Kamchatka and flew to the central part of the Pacific Ocean.” The aircraft attacked the designated targets with cruise missiles.

The bombers were escorted by MiG-31BM interceptor fighters. After completing the task, the Tu-95s performed over-ocean refueling from two Il-78 tankers and returned to the local airfield.

At the moment, the Ministry noted, the main tasks of the exercises have been completed. In the course of the maneuvers, control of forces at great distances from the bases, antisubmarine and antiaircraft defense of ships, convoy operations and execution of joint attacks with the aviation against ship detachments and important infrastructure facilities of the simulated enemy were practiced.