Throw his ashes into the sea or bury him in secret? Peru’s surreal dilemma to avoid tributes to the Shining Path leader 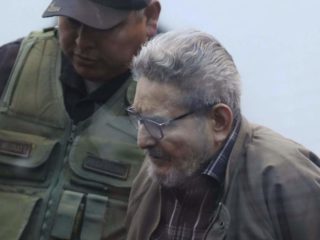 What to do with the body of a terrorist? This is the question that runs through Peru today after the death of Abimael Guzmán, the leader of the Shining Path, the organization that murdered tens of thousands of people in the 1980s and 1990s and whose name became a symbol of extreme violence against of the general population.

Guzmán died last Saturday, at 86 years of age and in prison. He was serving two decades of the life sentence to which he was sentenced after being arrested in 1992 by the regime of Alberto Fujimori, the former president who is also serving sentences for human rights violations and corruption in prison.

Since his death was confirmed, a debate broke out in the country about what to do with a body that, three days later, has not been seen publicly. The government’s dilemma is that if it is buried in a cemetery, it can become a place of pilgrimage for its admirers. And in no way can homages to a terrorist be allowed.

The body of Abimael Guzmán remains in his cell at the Callao naval base. This is an image of the diligence carried out by the Callao Prosecutor’s Office. pic.twitter.com/YjTUUPxEBG

President Pedro Castillo, his ministers, congressmen, opposition politicians and citizens have become involved in a controversy that at times seems like a story by Gabriel García Márquez, the Colombian Nobel Prize winner who made Latin American magical realism known to the rest of the world.

Among the characters in this story are ministers who have been linked to the Shining Path, a widow who has already uselessly claimed the remains, since they are not going to hand them over because she is also serving a sentence for terrorism; and officials of the Executive and Judicial branches who are juggling to decide what to do with the body without breaking the law.

It is not known what to do with the body of Abimael Guzmán. It’s a hot potato. I suppose that when Alberto Fujimori dies we will have the same problem. Or are they going to bury him with honors and turn a criminal’s grave into a place of worship? Will they do that to their victims?

From the Government they handle the possibility of incinerating it and throwing the ashes into the sea, or burying it in secret, in a place where no one can go to claim it or profess admiration.

The General Health Law establishes that if a body is not claimed by anyone within a period of 36 hours, it remains in the custody of the Attorney General’s Office, which, in turn, decides whether to donate the remains for investigation purposes or send to be cremated in some public cemetery.

Today in Tarata and the Oval of Miraflores. “We want to see the body of Abimael Guzmán” people shouted. “Terrorism never again” “Come on, damn people, the people do not give up the damn thing” pic.twitter.com/pBeecGR8Xy

For this reason, the Minister of Justice and Human Rights, Aníbal Torres, has already asked the Attorney General, Zoraida Ávalos, to opt for cremation, since burial could affect “public order and the security of society.” , because would become a “place of worship” that the Peruvian State should in no way endorse.

But the process is not so simple or automatic or immediate. First, it must be declared that it is an abandoned body and studies must be carried out to confirm its identity and the causes of death. Fingerprint, odontogram, and anthropology examinations applied to Guzmán’s remains concluded that he died of bilateral pneumonia.

The problem is that the body has been reclaimed for burial. The request was made by Elena Iparraguirre, a Shining Path leader who is also serving a life sentence. Both were married in prison in 2015, in a brief ceremony, but they were never allowed conjugal visits.

While the Government does not make a decision on what to do with the body of the terrorist Abimael Guzmán; his followers of the Movadef, in posters placed in a street of the dist. San Juan Bautista in Ayacucho, they ask that he be delivered to his wife Elena Iparraguirre pic.twitter.com/qz5ISOMRpX

The followers of the Maelo thought of the radical group the resistance are in the morgue wanting to see the body of Abimael Guzman. Now the phrase is insurgency = uprising against the authority and to think that this is how the terrorist movements began without knowing the authority pic.twitter.com/0ymSmXoT22

Through his lawyer, Iparraguirre processed a power of attorney to authorize Iris Quiñones, another member of the terrorist organization who is already at large, to identify and bury Guzmán. He appealed for the right to bury him in accordance with his religious beliefs.

But the answer was negative. In addition, the woman was sanctioned, since the National Penitentiary Institute ordered her incommunicado when it was discovered that on Saturday, when Guzmán died, she made phone calls in which she asked for honor and glory in her memory, which is framed in the crime of apology of terrorism.

The Callao Court declared inadmissible Elena Iparraguirre’s request for the body of Abimael Guzmán to be delivered to her. Good that this issue is resolved quickly. pic.twitter.com/c8PXtPDjQn

On the day of Guzmán’s death, President Pedro Castillo reiterated his “firm and unwavering” condemnation of terrorism, but his Chief of Ministers, Guido Bellido, who carries accusations of alleged links or defense of the Shining Path, was not so blunt.

Terrorist leader Abimael Guzmán, responsible for the loss of countless lives of our compatriots, has died. Our position condemning terrorism is firm and unwavering. Only in democracy will we build a Peru of justice and development for our people.

In fact, he did not share the vision of the Minister of Justice on the risks involved in the possibility of burying Guzmán. “It is a personal opinion, probably, he will have his reasons,” he said, warning that the Government will support the decision made by the Prosecutor’s Office.

In the media, in the networks and in the streets, Guzmán’s crimes are discussed, a time plagued with political violence is remembered and stronger positions are demanded from the Government. In Congress, the majority of the caucuses have already spoken in favor of incineration. On an open page, signatures are being collected under the motto: “It doesn’t deserve a grave.”

It is curious that the only party that has NOT signed the statement requesting that the body of the genocidal Abimael Guzmán be cremated, is Peru Libre. They cannot with their little heart … pic.twitter.com/8CMCx4KubF

Some lawyers have already warned that the decision is not so easy because it may involve retaliation on the part of those who still sympathize with Shining Path today. And he is right, because in some communities messages have appeared demanding that the body be handed over to the widow. In addition, other groups have already organized marches to demand to see the remains of who they still consider to be their leader.

Meanwhile, a body waits in the morgue.