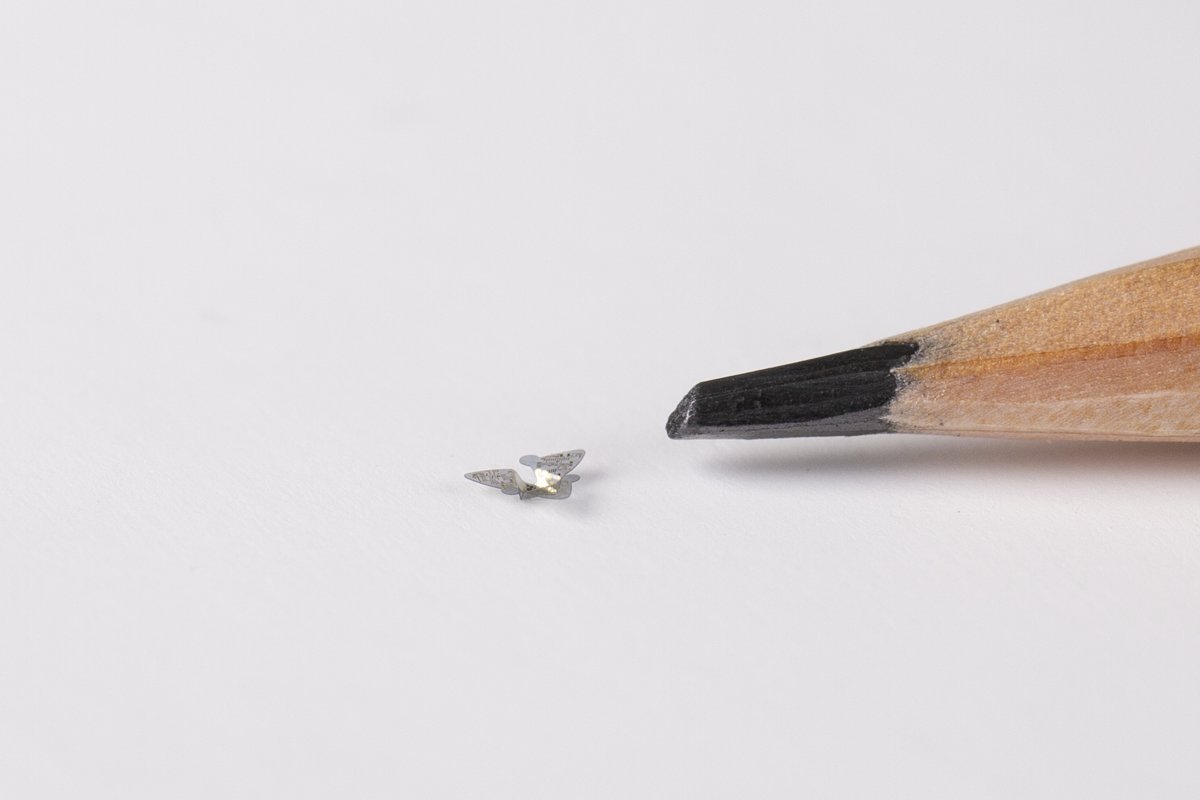 Tiny like grains of sand: How flying microchips are supposed to collect environmental data

Maple seeds have wings, and as soon as they fall from the tree, they flutter around like a helicopter. Even a light breeze is enough to carry them far away – a clever strategy of propagation that nature has devised.

A team led by materials researcher John A. Rogers from Northwestern University in Illinois has taken such natural phenomena as a model and a flying microchip (or “microflyer”) the size of a grain of sand developed. It has neither a motor nor any other mechanical drive – only the wind carries the chip through the air. Its purpose is to monitor air pollution and diseases. In addition, the fluttering chip is considered to be the smallest flying structure ever made by human hands.

The researchers want to equip the chip with miniaturized technology, including sensors, an energy source, antennas for wireless communication and embedded data storage. In the first tests, for example, sensors were used that detect particles in the air, as well as pH sensors to monitor water quality and photo detectors to measure solar radiation at different wavelengths.

The microflane thus consists of two parts: the millimeter-sized electronic functional components and the wings. The weight of the electronics is concentrated in the center of the microflane to prevent it from losing control and falling to the ground. In addition, the researchers have optimized the aerodynamics in such a way that the interaction with the air creates a slow, stable rotational movement that carries the chip. It should cover as wide an area as possible before it sinks to the ground.

In order to design the micro-flyers, the team examined the aerodynamics of various plant seeds and was mainly inspired by the Tristellateia plant. “Over billions of years, nature has developed seeds with very sophisticated aerodynamics,” says Rogerts. “These structures are designed to fall slowly and in a controlled manner and to interact with the wind patterns for as long as possible to ensure the survival of the plant.” By ensuring that the seeds are widely dispersed, otherwise sedentary plants can spread over great distances and colonize large areas. He and his colleagues took up these design concepts, adapted them and transferred them to electronic circuit platforms.

Roger’s colleague, mechanical engineer Yonggang Huang, simulated the airflow around the device on a large scale to mimic the slow, controlled rotation of the Tristellateia seed. “The computer-aided modeling enables the structures to be optimized quickly,” says Huang. “That is impossible with trial-and-error experiments.” The structures can now be formed in a variety of sizes and shapes, some of which even put nature in the shade, as the aircraft travel in more stable trajectories and fall more slowly than corresponding seeds.

The manufacturing process is inexpensive: the researchers first made a preliminary product for the flying structure with a flat geometry. Then they glued this to a slightly stretched rubber substrate. As soon as the stretched substrate relaxes, a controlled buckling process occurs, through which the wings unfold into precisely defined three-dimensional shapes. “This strategy is very effective because all semiconductor components are built in such planar layouts,” says Rogers. “So we can use the most advanced materials and manufacturing methods in the consumer electronics industry to create standardized, flat, chip-like designs. Then we just turn them into flying 3D shapes based on principles similar to those of a pop-up book.”

The cheap production makes it possible to use the chips in bulk. The researchers envision a large number of miniaturized sensors that are distributed in high spatial density over large areas to form a wireless network. They should be thrown from an airplane or from a building and spread over a wide area, for example to monitor environmental remediation measures after a chemical accident or to measure air pollution at different altitudes. And all of this as barely visible swarms.

The effort to miniaturize aircraft is not new. A well-known example is the DelFly Micro, which was presented in 2008 at Delft University in the Netherlands. The device measures ten centimeters and weighs three grams – so it is slightly larger than a dragonfly that it was modeled on. Robert Wood from Harvard University has developed a device that is inspired by insects and measures just three centimeters. But it has to get its energy from a cable. The RoboBee with a wingspan of 35 millimeters was also built in Havard. Piccolissimo is the smallest self-propelled machine to date. It’s a 28 millimeter wide device made by Matt Piccoli of the University of Pennsylvania.

With so many miniature devices, there is a risk that they will not only produce massive amounts of data, but also massive amounts of garbage. The researchers working with Rogers therefore built the electronics from materials that dissolve in water when they are no longer needed.

“We recognize that recovering large numbers of micro-planes will be difficult,” says Rogers. “We make physically volatile electronic systems using degradable polymers, compostable conductors and dissolvable integrated circuits that naturally dissolve into environmentally friendly end products as soon as they come in contact with water.”