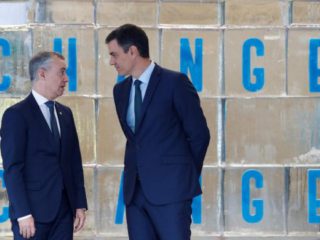 The news of Thursday starts with another mess of Podemos, which hid from its auditor the contract of the escort that Irene Montero used as a messenger and gardener. And with a new concession from Sánchez to the PNV, with which he has agreed to seek employment for the ETA members and allow them to serve their sentences in an “open environment.” These and other news today in OKDIARIO.

Podemos concealed from its auditor the contract of the bodyguard of Irene Montero and Pablo Iglesias, whom they used as a delivery boy, mechanic, gardener and family chauffeur. It was not until November 2019, when this newspaper revealed the irregular situation of this worker, that the person in charge of Regulatory Compliance, Mónica Carmona, became aware of this circumstance. For this reason, in an email to which OKDIARIO has had access, he asked the party’s management to send him the contract of the escort and other documentation to “prevent possible legal actions against the party.”

The agreement between the governments of Pedro Sánchez and Iñigo Urkullu for the transfer of prison authority to the Basque Country is now closed. But, what is more, the PNV plan for ETA prisoners goes through a generous regime that opts for serving sentences in an “open environment” and even with a reintegration plan based on the search for employment for those convicted of belonging to the killer gang.

The Prime Minister, Pedro Sánchez, has once again enraged public employees. His latest decision has been to remove all officials focused on essential services from the priority strategy to receive the vaccine. Sánchez’s decision will allow urgent access to these vaccines only to certain positions in each area and not globally. In this way, employees of Justice, the Post Office (which these days have been dedicated, for example, to guaranteeing voting by mail in Catalonia), of the General State Administration, Customs Surveillance, are outside the accelerated protection plan against Covid and Port, forestry and environmental agents, as well as workers of other essential services who carry out their activity in closed environments.

Manuel Mata Gómez is Ximo Puig’s number two and a true businessman who sees the opportunity even in the coronavirus. He is, at the same time, a lawyer and a socialist spokesman in the Valencian Parliament. His Government has been one of the most restrictive with the hotel industry: it has ordered the closure, ruining a good part of the bars and restaurants. But he, as a good entrepreneur, makes cash with the legal claims of those same restaurants, precisely because they have been closed. Of course, their lawsuits are directed against insurers, not against their Government, lest one of their two star jobs break down.

Carlos Carrizosa: “A powerful vote for Ciudadanos can drag the PSC into a government of change”

Carlos Carrizosa Torres (Barcelona, ​​1964) aspires for the first time to the presidency of the Generalitat. He replaces the current president of the formation, Inés Arrimadas, as head of the Citizens list, who in 2017 achieved the first victory of a non-nationalist party in a Catalan election. Of those 34 seats, now, the most optimistic polls give Carrizosa between 15 and 16. He maintains that polls are always wrong with them and he hopes to surprise in order to form a constitutionalist government and thus evict the independence movement from power.

The Proposal for a Law on “freedom of expression”, registered by Podemos and endorsed by the PSOE, aims to let acts of glorification of terrorism go unpunished. A measure that is proposed after, with Pedro Sánchez in the Government, these have increased more than 150% with respect to the Executive of Mariano Rajoy. Specifically, in 2017 – the last full year with an Executive of the Popular Party – 76 acts of worship were recorded for the ETA members. In 2020, up to 193 were documented, as recorded in the Observatory of Radicalization of the Collective of Victims of Terrorism (Covite). Compared to 2019, they have increased by 57%.