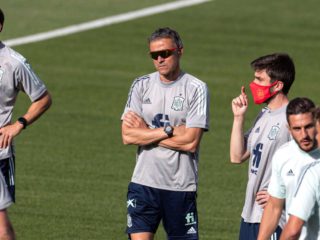 Madrid, Jun 10 (EFE) .- Health personnel of the Armed Forces will vaccinate this Friday, starting at ten o’clock in the morning in the Ciudad del Fútbol de Las Rozas (Madrid), the international Spanish footballers summoned for the Eurocup, according to the Ministry of Defense has informed.

The members of the team will be immunized with the vaccine from the US pharmaceutical company Pfizer, after the Government announced on Wednesday its intention to do so so that they will defend Spain “in the best conditions” at the European Championship.

It is, according to the Minister of Health, Carolina Darías, a decision “tremendously important and necessary” and based on the same ethical criteria that have been applied with the Olympic team.

The Spanish soccer team will be vaccinated like this days before the start of the Eurocup, after the positive of two of its players, applying the same protocol as the Olympic team that will travel to Tokyo this summer, also the result of the collaboration of the departments Defense, Health and Culture and Sports.

Two players of the national team tested positive for coronavirus, the first of them, last Sunday, Sergio Busquets, the captain of the team, when he was forced to leave the Las Rozas concentration. The second is Leeds United defender Diego Llorente.

The 22 internationals concentrated in Las Rozas, the coaching staff and the Federation personnel who work with the senior team, have tested negative in the PCR tests carried out this Wednesday.