Toyota aims to sell only zero-emission vehicles in Europe 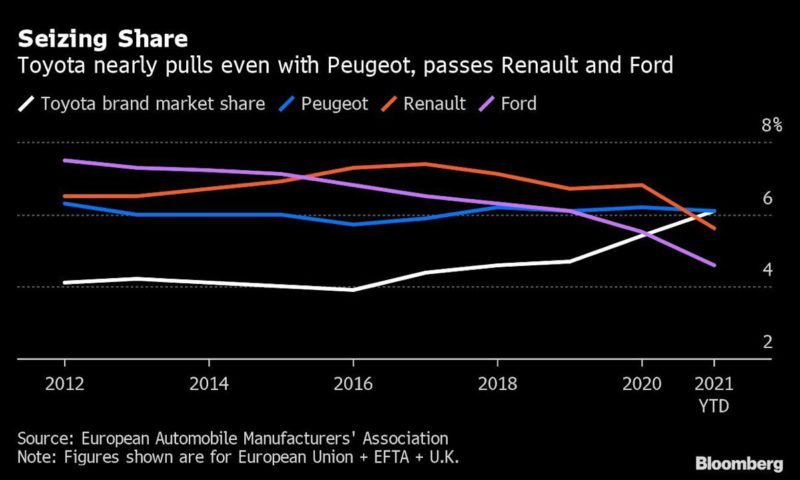 (Bloomberg) – Toyota Motor Corp. has vowed to be ready to sell only zero-emission cars in Europe by 2035, an unexpected promise that aligns the world’s largest automaker with the world’s most ambitious climate plan.

The Japanese automaker also set a new intermediate target for at least half of its sales in Western Europe to be zero-emission vehicles by the end of the decade. That’s a big step up from the sales mix of roughly 10% expected by 2025.

While the goals align Toyota with the measures of the climate agreement that the European Union proposed in July, the company qualified its vision for 2035 by saying that it assumes that the block will have enough infrastructure to recharge batteries and refuel hydrogen. EU member states are already discussing an end date for combustion engines, with France advocating plug-in hybrids being allowed longer and Italy seeking to protect super sports cars from phasing out.

Toyota’s commitments are somewhat unexpected, as executives have long sought to preserve a role for hybrids like the Prius in reducing exhaust emissions until fully electric vehicles are available to more consumers. The company’s recent performance in Europe has justified this strategy: Auto buyers have turned against diesel in droves since the Volkswagen AG engine handling scandal came to light in 2015. Toyota’s sales have risen and the average CO2 emissions of its fleet are the lowest among the major conventional automakers.

But despite Toyota’s success with hybrids, the company is finding it increasingly difficult to say that consumers in some parts of Europe are not yet ready to make the leap to exclusively battery-powered cars. More than 800,000 of these types of electric vehicles were registered in the region this year through September, an increase of more than 90% over the previous year. Elon Musk’s argument to go all-electric has won over investors, with Tesla Inc. surpassing Toyota as the world’s most valuable automaker last year with no turning back.

“We are in no way on the defensive or reluctant supporters,” said Matthew Harrison, Toyota Europe chief executive officer in an interview. “We will focus on acting in good faith, but we need the same kind of conviction, effort and progress also from a renewable energy capacity and infrastructure perspective.”

Other automakers have already outlined targets similar to Toyota’s. VW’s eponymous brand has said it plans to stop selling combustion cars in Europe between 2033 and 2035. Ford Motor Co.’s passenger car range will be fully electric by 2030. Daimler AG’s Mercedes Benz has pledged to be ready. to be fully electric by the end of the decade where conditions allow.