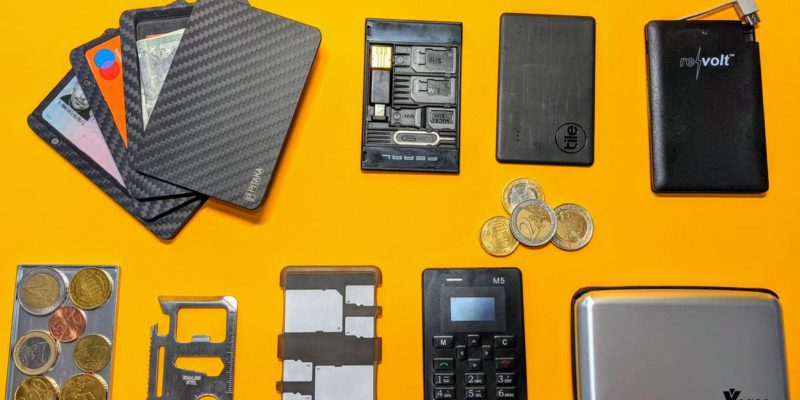 Probably the most popular smart feature of a wallet is an RFID protection against money or data theft. But Bluetooth trackers such as the popular Airtags (test report) are increasingly finding their way into wallets. In this buying guide, we present wallets that already have these and other functions with them. We will also be showing cost-effective solutions for “retrofitting” RFID blockers, Bluetooth trackers, power banks, multi-tools, USB sticks or even an entire cell phone.

Bluetooth finder for the wallet

The currently most popular and probably also the best Bluetooth finder is the Apple Airtag (test report). It can be set up very easily without an additional app and, thanks to the perfect community search, works reliably even outside the Bluetooth range. However, it has two catches. On the one hand, it only works with Apple devices and, on the other hand, there is no mounting option.

The I-Clip Airtag wallet has a double-walled cut-out for the Apple Airtag in its leather flap. It also has space for up to 12 cards and notes. I-Clip’s wallets are popular among the editorial staff because of their light and compact design and ease of use.

But there are also options for non-Apple users to retrofit their wallet with Bluetooth trackers. Bluetooth finders in credit card format, such as the Tile Slim (test report), are particularly practical. It is only about three millimeters thick and still offers a decent range. Its disadvantage: the battery is permanently installed and cannot be replaced. After all, according to the manufacturer, it should last three years. The Orbit Card-Tracker (test report) also comes in credit card format and even has a rechargeable battery. We have summarized all test reports and a lot more in our key finder theme world. Including our comparison test: Twelve Bluetooth key finders.

For those who regularly save data on a USB stick and always want to carry it with them, there are solutions in credit card form.

If you don’t want an external key finder, you will find a few wallets on the market that already integrate Bluetooth. However, caution is advised here. Often these are very cheap products imported directly from China, the quality of which can fluctuate. For example, the XAJGW Smart Wallet costs a good 30 euros and still offers Bluetooth tracking via app and a warning signal if the wallet is more than ten meters away from the smartphone.

Some of these wallets cost just a few cents on Amazon. However, the retailers refinance themselves through the shipping costs that are incurred for each individual product.

RFID blockers are even cheaper. Ten credit card-sized envelopes cost from 23 cents including shipping costs. RFID protection cards in credit card form are a bit more expensive, but still affordable. Like a burger bun, they cover the outer cards in the wallet and protect the NFC cards from data theft.

We find slots for wallets without their own change pocket, which offer space for a few coins, very practical. The Xcase Coin Case is not cheap at just under 4 euros, but is made of metal. This makes it particularly robust and at the same time protects the cards behind it from unauthorized RFID access.

Attention, now it’s getting wild: If you like, you can even carry a fully functional cell phone in the form of a credit card with you. The cell phones are suitable for little more than making calls or sending and receiving SMS. On the other hand, they are very cheap with a price of 30 euros and more and with a thickness of 5 millimeters they are comparatively little bulky. An interesting alternative as an emergency mobile phone. What else is there in this area, we have summarized the article purchase advice: emergency cell phones up to 20 euros.

Power banks are without question very practical. After all, there is hardly anything more annoying than when the battery of your smartphone or Bluetooth headphones runs out of power at the wrong time. But what use is the best power bank if it is not at hand at the crucial moment? Battery packs that fit in a wallet can help here.

The Revolt Powerbank Mini offers a capacity of 2500 mAh. That is enough to charge the empty battery of most smartphones by around half. Practical for older smartphones and many gadgets: A micro USB plug is permanently attached to the power bank. Similar to an RFID blocker, the NFC cards behind it are protected from data or money being tapped. However, it has one major disadvantage: it is a few millimeters larger than a normal credit card and therefore does not fit into some wallets.

The Pitaka MagWallet UE is an exceptional wallet. On the one hand, it consists partly of aramid fibers, also known as Kevlar. The material is particularly robust, light, heat and cold resistant. On the other hand, the wallet is made up of several layers that hold together magnetically. A larger magnet serves as an axis for each layer, several smaller magnets allow them to be flush or “snap in” when opened at a 45-degree angle. So the purse either keeps closed or reveals its contents.

When opened, the buyer has access to cards or banknotes, provided that he has also ordered the banknote compartment. That works surprisingly well and reliably. However, the MagWallet UE is also neat. Including the bank note, it measures 10.3 × 7.1 × 1.6 centimeters. Despite its size, it only holds five cards and around four banknotes. In it, two metal plates protect a card from unauthorized RFID access.

Visually, in terms of its workmanship and its unusual, modular concept, the Pitaka MagWallet UE knows how to please. However, it is too big for us and it holds too few cards. Nevertheless, it is a real eye-catcher. If you want to afford it: It costs 80 euros, the bill compartment costs another 30 euros.

With the Lite Wallet, Ledlenser has a wallet with a built-in flashlight in its portfolio. The flashlight offers two levels of brightness. On the first, it should reach 10 lumens, which roughly corresponds to the light output of a weak smartphone LED. In the second stage, the Lite Wallet supposedly creates up to 150 lumens, which by far outshines the flashlight function of a smartphone. The light distribution is largely homogeneous. It’s nice that Ledlenser supports wireless Qi chargers (the best 2021) in addition to charging via USB-C. The Lite Wallet offers RFID protection for the cards.

Unfortunately, the Lite Wallet, which is available from 27 euros, has a disadvantage that probably disqualifies it for many users. Because it is empty with the dimensions of 9.6 × 7.0 × 1.6 centimeters, comparatively large, thick and with a weight of 115 grams quite heavy. Even so, only five cards and a few banknotes fit in here. If you squeeze in more, you can no longer close the push button properly. There is no compartment for change. We can easily imagine an application. The bright LED at night could dazzle potential attackers and cause them to flee.

Multi-function tools in credit card form are not smart, but practical. The classic here comes from Victorinox. The Swisscard Classic includes scissors, a knife, a pen and a pair of tweezers. It is 4.5 millimeters thin. If you only need a knife, you can take a look at the high-quality Walther credit card knife. But before your next flight you should definitely take it out of your wallet.

The SIM card adapter from Pearl is interesting for everyone who frequently changes SIM cards and needs the appropriate adapter. It offers space for up to six different SIM cards and also comes with a micro SD card reader for micro USB and USB-A.

One of the most popular modern features of a wallet is RFID protection against digital theft. If you want that, you don’t have to buy a new wallet for it – there is appropriate protection for a few cents. But the Bluetooth trackers, which are very practical in everyday life, also fit in every wallet. If you want, you can get wallets from 30 euros that already have an integrated Bluetooth finder.

The tiny emergency cell phones, which also fit in every purse and remain ready for use for many weeks when switched off, kill the bird. The devices cost around 30 euros.