TrueCommand 2.0: Faster thanks to InfluxDB instead of PostgreSQL 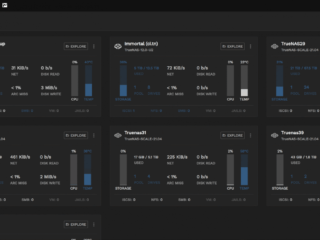 The latest version 2.0 adds some new functions to TrueCommand. It is the administration application for TrueNAS systems from the provider iXsystems, formerly known as FreeNAS. It is still a beta, but it already offers an outlook on many corporate functions.

Under the hood, the developers have replaced the PostgreSQL database with InfluxDB. The software should be able to record metrics in real time and no longer just at 30-second intervals. InfluxDB is a free database management system that is specially designed for time series. To relieve the network, iXsystems has also updated its own monitoring protocol.

There is also a new Storage Navigator, which can be used to create, delete and manage the datasets and volumes. The iSCSI Manager can also set up iSCSI LUNs automatically. In addition, the administration software no longer reacts as sensitively as before to interrupted network connections, which is intended to reduce warnings about systems that can no longer be reached.

In addition, with the new version, TrueCommand is now the primary management environment for TrueNAS scale clusters. In connection with the latest release 21.04 of the scale system, clusters and cluster volumes can be set up directly, which can be shared via NFS, SMB or iSCSI.

TrueCommand is free for up to 50 storage media, with all additional hard drives or SSDs costing US $ 2 a year. The software can be operated locally as a container or VM, iXsystems has been offering a cloud version since TrueNAS 12. Details on this and the new functions can be found in the announcement.