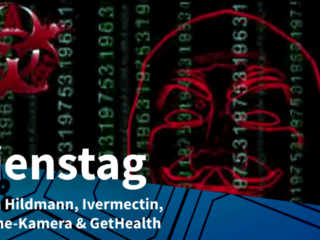 For the notorious conspiracy theorist Attila Hildmann, things haven’t worked for a while. In Germany he was accused of hatred, insults, threats and public incitement to criminal offenses, which is why he fled to Turkey. His online platforms have now been hacked – a brief overview of the most important reports.

Soon new revelations about the conspiracy theorist Attila Hildmann and his friends should reach the public. Among other things, one knows who warned Hildmann of an arrest warrant, whereupon he could escape to Turkey early, according to the hacking collective Anonymous. According to its own information, it received access to emails, contacts, Telegram channels and Hildmann’s social media accounts. A trusted administrator gave Anonymous access to Attila Hildmann’s conspiracy platforms.

Speaking of conspiracy theorists: In August, prescriptions for the anti-parasitic drug ivermectin skyrocketed in the United States when the drug was widely advertised in the conservative media landscape there and also supported online by a group of doctors who were popular in anti-vaccination circles. All of a sudden, ivermectin was considered a COVID-19 treatment – and continues to be promoted as such. For those who have been taking the medicine for years, however, the sudden fame came unexpected or even undesirable. Ivermectin: What If Your Medicine Suddenly Becomes Corona Miracle Drug.

Damage of a completely different kind can fast motorcycles cause. In a support document freshly published over the weekend in English, Apple announced that certain vibrations generated by high-powered two-wheelers the OIS and closed-loop AF functions of an iPhone affect. So fast motorcycles can damage iPhone cameras.

Scientists have long been calling for stronger regulation of wearables and other technology worn on and in people. Fitness bracelets and smartwatches collected more and more sensitive personal informationwhich not only undermines privacy. It becomes particularly delicate when user information such as names, dates of birth, weight, height, gender and GPS logs end up unprotected on the network. One such Data leak The New York-based company GetHealth, which offers holistic solutions for accessing health and wellness data, is now responsible for: More than 60 million data records from wearables and fitness trackers were unsecured online.