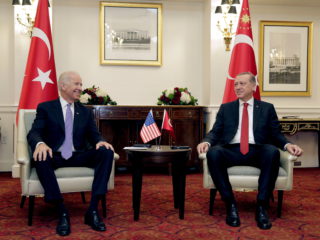 It took Joe Biden four months to pick up the phone from Recep Tayyip Erdogan since his election as president of the United States was confirmed, a sign of the poor state of relations between the two countries, once close allies. Finally, it was the American who called his Turkish counterpart on April 23 to inform him that the next day he would recognize the killings of Armenians at the hands of the Ottoman Empire in 1915 as “genocide”, something that no American president had done until now in deference to his partners in Ankara. To sugarcoat the bad news, Biden promised Erdogan that the two would meet privately on June 14, during the NATO summit. In Turkey, afflicted by the economic crisis and whose government accumulates scandal after scandal, they give great importance to this meeting in the hope that it will serve to redirect bilateral relations and thus regain some international credibility.

“Our president’s meeting will be critically important in every way. We hope it will give positive results, “said Turkish Foreign Minister Mevlüt Çavusoglu in an interview broadcast on Thursday by the state-owned channel TRT1. Such is the significance of the meeting that even the mobster Sedat Peker – immersed in a spiral of accusations against the Government through videos on YouTube – has postponed the revelations he planned to make about Erdogan, according to him, at the request of a ruling party official that he feared that new scandals would weaken his negotiating strengths against Biden.

On the table of the two political leaders there are a whole series of issues that separate them: the US support for the Kurdish militias that Ankara considers terrorists, the imprisonment of employees of the US diplomatic legations in Turkey, the pending sentence against a bank. Turkish used to circumvent the US embargo on Iran, foreign policy stakes … But the hottest issue is the Russian-made S-400 anti-aircraft missile system that Ankara acquired from Moscow in 2019 and that its partners in NATO consider that can jeopardize the Alliance’s defensive strategy. This acquisition has led Washington to expel Turkey from jointly manufacturing the new F-35 fighter models – with which the Turkish Army was seeking to renew its air fleet – and to impose sanctions on the Turkish military industry, which could expand if Ankara “Ownership” of the Russian system does not cease.

Turkish diplomacy has considered various solutions to satisfy the US. Previously, there had been talk of handing over the S-400 to a close Turkish ally such as Azerbaijan or Qatar, but, according to the ex-military Metin Gurcan and analyst Sinan Ulgen in separate articles, The proposal that Erdogan will present to Biden involves installing the missile system at the Turkish-American base in Incirlik, leaving it under US supervision and restricting its use to “exceptional circumstances”. In fact, Turkey has already announced that it will send back home the Russian technicians deployed with the S-400s in Turkey.

The head of Turkish diplomacy also assured that he hopes to advance the possibility of purchasing a US-made Patriot defense system, although until now the issue of technology transfer – key for Turkey, which seeks to develop its indigenous industry – has not it had been resolved. “If the United States does not guarantee us the Patriot, we could get an antiaircraft defense system from other allies,” said Çavusoglu, referring to the talks with the Italian-French company Eurosam, which until now had been blocked by the Government of Paris, faced Turkey in the Eastern Mediterranean, but with which the tension has eased in recent months.

Since the departure of Donald Trump from the White House – with whom Erdogan had direct contact and wide influence – Turkey has encountered a more demanding and even hostile Administration: Turkish televisions have repeated several times an interview in which, before being elected presidential candidate, Biden was betting on “supporting the Turkish opposition” to “defeat Erdogan”, and several Turkish leaders, including the Interior Ministry, publicly maintain that the previous Democratic Administration – of which Biden was vice president – is behind of the attempted coup in 2016.

In a televised interview on June 1, Erdogan acknowledged that the relationship with Biden “has not been easy” and that “so much tension has never been experienced” with a US government, not even during George W. Bush. But, afflicted by internal and external difficulties, the Turkish Executive has turned a blind eye and intends to take advantage of the fact that Biden seeks to strengthen the unity of the Atlantic Alliance against Russia to amend relations. He is also aware that Washington is looking for alternative allies in the area, including Greece.

In this regard, Turkey wants to assert itself on two issues in particular. He has offered to take over the security of Kabul airport when the US leaves Afghanistan in September. In addition, in recent months, it has signed strategic agreements with Ukraine, a country to which it has also sold its famous drones, which have shown their effectiveness precisely against the Russian defensive systems in the wars in Syria, Libya and Nagorno-Karabakh. Similarly, Poland has become the first EU country to acquire these unmanned aircraft and Latvia has given signs that it could be the next EU state to acquire Bayraktar TB2 drones, designed by the company of one of Erdogan’s sons-in-law. . Turkey has also offered them to Romania, which, together with the previous two countries, are key in NATO’s strategy of containment against Russia.

These advances have irritated the Russian president, Vladimir Putin, who until now accepted that Turkey took sides with opposing sides in different conflicts as long as they were managed bilaterally between Moscow and Ankara. The ties between the two governments have increased in the last five years in all fields (from the military to the energy), and so has the Turkish dependence on Russia and hence the unrest in the Kremlin. Russian Foreign Minister Sergey Lavrov warned Ankara to “stop adding fuel to the fire of Kyiv’s militaristic sentiments” and his office spokeswoman warned that Russia would not want to have to “meddle in the internal politics” of Turkey.

Citing the covid-19 pandemic, Moscow has suspended flights to Turkey, a severe blow to the Turkish tourism sector. “President Erdogan’s relations with Putin are not as they used to be in recent years. The winds have changed since the Ukrainian crisis. When, on May 31, Putin extended the flight restrictions for another month, the Turkish hope of reducing its current account deficit thanks to Russian (and German) tourism was damaged, and things changed even more, ”he writes in analyst Murat Yetkin, who currently considers that “the closest objective of Turkish foreign policy is that the meeting [con Biden] Wow nice”.

However, as a sign of that Turkish attempt to navigate between two waters without finishing opting for one ally or another, the Turkish representatives recently lobbied to moderate a NATO statement that condemned the Belarusian regime (Moscow’s ally) after forcing the landing of a civilian plane to capture a dissident and another against Russian cyberattacks on US facilities.