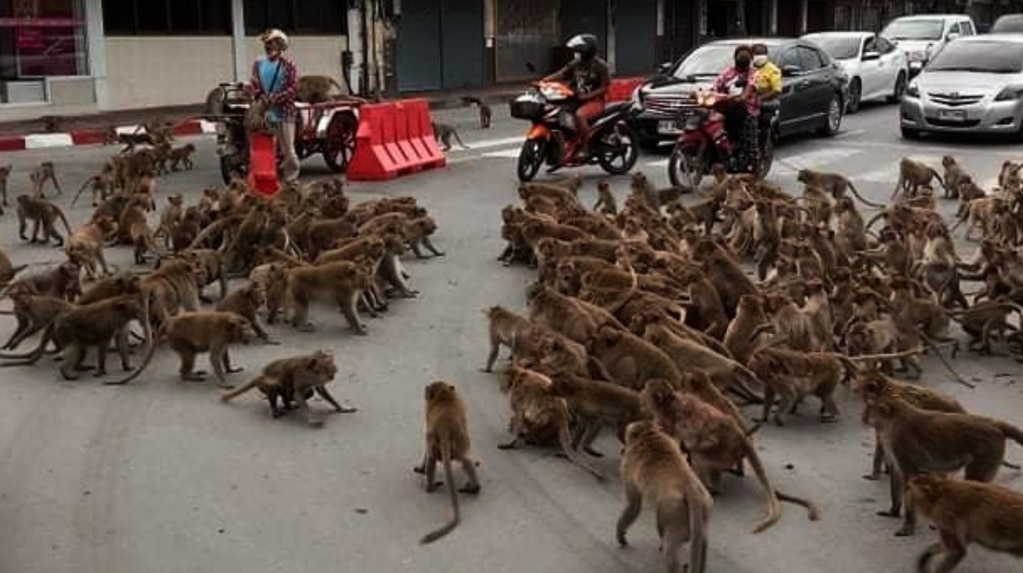 Social networks are an inexhaustible source of global content. Through them, we can find out what is happening on the other side of the world. In this case, a video was viralized in which two gangs of monkeys they started fighting in the middle of a city over a banana.

The event occurred in Thailand, the country famous for its tropical beaches, opulent royal palaces and ancient ruins. More specifically in Lopburi, the province where the shrine of Phra Prang Sam Yod. It is a 13th century temple. It is currently a popular tourist destination and has a sizeable population of crab-eating macaques.

This place is frequently visited by tourists who entertain themselves with the wonders of the city, while the monkeys from the area ask them for food. The coronavirus pandemic, and especially the third wave that is already sweeping different countries, has decreased the number of visitors. For this reason, the animals are hungrier than normal.

Normally, a group of monkeys order food at the sanctuary of Phra Prang Sam Yod and the other in the market and the Government Bank.

A Lopburi citizen named Wisrut Suwanphak released images and videos of the spectacular moment when the two gangs clash by a banana thrown by a tourist. Other pedestrians and motorists passing through the area also filmed the unusual moment. Many of them did not get out of their vehicles out of fear.

The monkeys were so many that they terrified everyone. Although many of them are used to seeing this type of fights, the local residents assure that a fight that included so many macaques did not take place a long time ago. The fight lasted several minutes until one of the monkey gangs surrounded the enemy group, forcing them to flee.

// After an unexpected find, they discover that a giant bat inhabited the planet thousands of years ago

Monkey crab macaque It is a species of catarrhine primate of the Cercopithecidae family. In addition to Thailand, they are also found in Indonesia, the Philippines, and Malaysia, as well as the Andaman Islands. This type of monkeys is included in the list of 100 of the most harmful invasive alien species in the world of the International Union for Conservation of Nature.