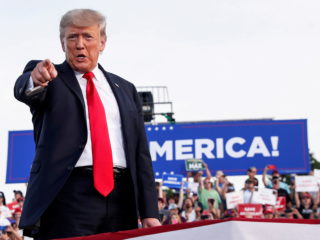 Former President Donald Trump’s tax returns are one step closer to going public. The Department of Justice has ordered the United States Treasury to hand over that information to Congress, a thorny material that the Republican magnate has tried to keep secret until now, in the face of the tradition of US candidates and leaders, and that is being subjected to investigation in a New York court.

In a memorandum dated this Friday, the US justice responds to the request made in 2019 by the Ways and Means Committee of the House of Representatives, controlled by the Democrats, regarding the president’s income declarations for several years prior to his arrival at the White House, as part of his fiscal review and audit of the presidents in the face of possible conflicts of interest. The then Trump Administration refused to provide that information and the House filed a lawsuit.

The Office of the Legal Counsel of the Department of Justice states in its note, signed by Dawn Johnsen, that the Committee “has invoked sufficient reasons” to justify its request for information and that, in compliance with federal law, the Treasury – department of which depends on the US Treasury (Internal Revenue Service, commonly known by the acronym IRS) – it must satisfy it.

This is the second legal fight Trump has lost in a year to keep his tax information out of public view. In July 2020, the Supreme Court already determined that the then president could not block the financial and tax information that the Manhattan District Attorney’s Office demanded of him (and that is now in the hands of the prosecutor Cyrus Vance). That decision marked the limits of the presidents’ power to curb demands for information, but returned the parallel demand from Congress to the lower courts.

The Treasury, whose head is now Janet Yellen, plans to hand over the information, according to a source from this department to The New York Times. Meanwhile, the investigations continue in Manhattan. The Prosecutor’s Office has accused his business group of operating a “crushing and audacious” plot for 15 years to defraud the treasury, an accusation from which the Republican has been exempted for now on an individual level but which tarnishes his political future.