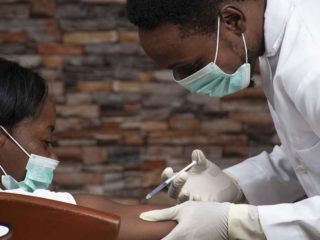 More of 800 people received one or more sham vaccines from coronavirus in Uganda. The authorities denounced that a network of “unscrupulous” doctors and nurses applied them between May and June.

Bogus vaccines, sometimes mixed with water, were administered amidst a wave of infections in a country whose average is 1700 new cases daily. The presumed scammers they aimed at people willing to pay for his injections when in Uganda doses were scarce, reported Warren Naamara, health services supervisor in the presidency.

“Unscrupulous people, with the intention of making money, deceived the public with false vaccines against Covid-19,” he added. And he added that “two health workers were detained and a doctor is on the run ”.

The analyzes showed that the products did not contain any dangerous products And that only there was water in some of them“Said the official, quoted by the news agency AFP. Those involved charged an equivalent of between $ 25 and $ 120 per application.

Since the start of the pandemic, Uganda has registered 91,162 cases and 2,425 deaths, according to the latest count released by the Ministry of Health.

The World Health Organization (WHO) warned that Africa last week registered a 43% increase in the coronavirus deaths, which is noting that hospital admissions are increasing rapidly and that countries are facing shortages of oxygen and beds in intensive care units. Deaths rose to 6,273 in the last week, up from 4,384 reported the previous week. Africa is now less than 1% from the weekly peak reached in January, when 6,294 deaths were recorded.

Namibia, South Africa, Tunisia, Uganda and Zambia accounted for 83% of the new deaths recorded last week. The rate of lethality of the continent, which is the proportion of deaths among confirmed cases, currently stands at 2,6% versus the world average of 2.2%.

Cases increased during eight consecutive weeks, exceeding 6 million. During the past month, Africa recorded an additional one million cases. This is the shortest time it has taken so far to add one million cases. Comparatively, previously it took three months to go from 4 million to 5 million cases.

The increase in cases comes amid an inadequate supply of vaccines. Only 18 million people in Africa are fully vaccinated, representing 1.5% of the continent’s population compared to more than 50% in some high-income countries. Those vaccinated with at least one dose reach 2.95%, a difference of almost 17 points with Oceania and 23 with respect to Asia. Much farther from South America (leading 36%), North America and Europe (both at 44%).

“The double barrier of vaccine shortages and treatment challenges is seriously undermining the effective response to the growing pandemic. However, with fresh vaccine shipments expected and strong preventive measures, we can still change course against the virus, “said Matshidiso Moeti, WHO regional director for Africa, at a press conference days ago.