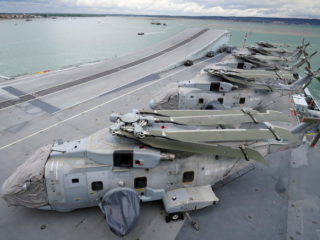 In an interview with The Telegraph, the military explained plans for the RAF to re-acquire skills that have not been practiced for 30 years, conducting a series of dispersal drills “without warning” called Exercise Agile Stance (‘Agile Posture’).

Within the framework of these, the combat aircraft will be ordered to disperse, which means that they will leave their bases to land at civil airfields or even on highways. As Wigston explains, if instead of two bases, all Typhoons “were on 12 bases”, they would be a “harder” target for enemies.

“We will learn to disperse again,” the marshal reiterated, adding that if Russia’s advanced cruise missiles were moved to the Russian enclave of Kaliningrad, “we would be within range.”

“It sounds a bit like a Cold War, but we have an urgent requirement to remember how to do it,” warned the military, who also noted that his country has not “kept pace” with Russia in terms of developing sophisticated air defense systems.

“Guarantee the permanence of parity”

For his part, the Russian presidential spokesman, Dmitri Peskov, recalled this week that among the objectives of the development of hypersonic missiles undertaken by Russia is to counteract the risks created by the United States and NATO in the field of strategic stability, including the deployment of the missile defense system in Romania and other countries close to Russia.

“If you recall, the president has repeatedly stated that, unfortunately, we have seen in recent decades and even longer the gradual dismantling of the entire strategic security document system,” Peskov said. In particular, he emphasized “certain steps taken by the US and NATO that have been hurting the existing parity, such as the deployment of the anti-missile system in Romania and other countries in immediate proximity to our borders “.

“All this has required measures that are capable of protecting Russia and guaranteeing the permanence of the existing parity. Such measures have been taken,” he said.

Russian Foreign Minister Sergey Lavrov declared in early June that, although Moscow does not hide the power of its Armed Forces or its influence in the world, Russia is not interested in imposing its way of life on other nations and wants to end the confrontation with the West.