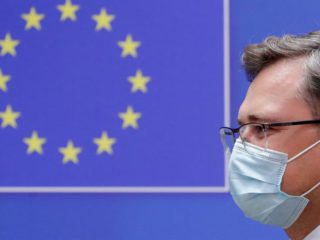 Moscow, Jul 21 (EFE) .- Ukraine requested on Wednesday consultations with the European Commission and Germany after the agreement reached between Washington and Berlin on the Nord Stream 2 gas pipeline, which will bring Russian fuel to Europe without crossing Ukrainian territory.

As Ukrainian Foreign Minister Dmytro Kuleba wrote on Twitter, the consultations were requested in accordance with “Article 274 of the Agreement on Association with the European Union (EU).”

The diplomat assured that the Nord Stream 2 project “threatens the security of Ukraine” and goes against the diversification principles of the EU Energy Union.

The United States announced hours before that it had reached an agreement with Germany by which it will allow the completion of the Nord Stream 2 gas pipeline in exchange for guarantees that Berlin will help Ukraine so that the project does not threaten its energy security.

In a joint statement, the United States and Germany listed a series of conditions under which, in practice, the US government accepts the completion of this project, of which more than 95% has already been built.

The US opposition to the gas pipeline was mainly due to the concerns of its allies in Eastern Europe, especially Ukraine, who fear that the project will allow Moscow to scrap the gas transit route through Ukrainian territory.

Under the agreement, Germany agrees to help Ukraine negotiate “an extension of up to 10 years” of its gas transit contracts with Russia, which expire in 2024.

German Chancellor Angela Merkel recently promised Ukrainian President Volodymyr Zelenski that her country will continue to be a transit territory even when the construction of Nord Stream 2 is completed.

“We want gas transit through Ukraine to be preserved,” Merkel said during a joint press conference with Zelenski in Berlin on July 12. EFE