UN asks to replace US $ 470,000 million in agricultural subsidies 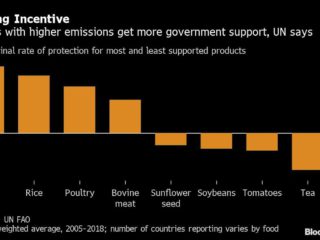 (Bloomberg) – The United Nations said global agricultural subsidies, which amount to $ 470 billion, are ineffective and unsustainable, and called for them to be replaced by other measures.

The most polluting agricultural raw materials, such as beef, milk and rice, receive the most subsidies, despite their environmental impact, said the Food and Agriculture Organization of the United Nations (FAO). in a report released Tuesday. About 87% of global subsidies distort prices and are harmful to the environment or society, according to the report.

The authors of the study emphasize that agriculture contributes to and is a victim of climate change. They called on policy makers to commit to modifying harmful policies at the UN Food Systems Summit to be held this month.

Global support to farmers is projected to rise to nearly $ 1.8 trillion by 2030, of which 73% will come from border measures such as import tariffs and export subsidies.

“Much of this support is motivating unsustainable practices and the degradation of nature, and does not necessarily guarantee that all people in the world can afford a healthy diet,” according to the FAO report.

Nota Original:UN Calls for Rethink on $470 Billion of Farm Subsidies (1)