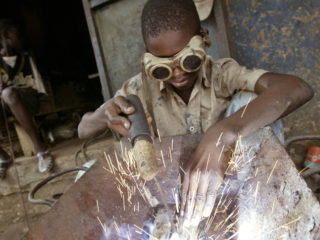 The UN warns that child labor has grown for the first time in two decades on a global scale, while the coronavirus pandemic could contribute to exacerbating the situation, reports the AFP agency.

The International Labor Organization (ILO) and the United Nations Children’s Fund (UNICEF) calculate in a joint report that at the start of 2020 the number of child laborers was 160 million, which represents an increase of 8.4 million compared to 2016. That is, the discouraging trend It was manifested before the world was hit by the coronavirus after 16 years of the indicator decline.

International agencies warn that about 50 million of minors more could swell the ranks of children already working in the next two years, if families plunging into poverty are not helped.

“We are losing ground in the fight to end child labor. Now, well into the second year of global closures, school closings, economic problems and shrinking national budgets, families are forced to make heartbreaking decisions“said Henrietta Fore, director of Unicef.

The report specifies that minors between the ages of five and 11 represented more than a half of the global figure. Likewise, it is evidenced a gender gap, since the boys add up to 97 of the 160 million children who work, without taking into account housework.

In the statistics, the category of adolescents between five and 17 years old employed in the so-called dangerous sectors that could affect your education or health. These are sectors such as mining or the heavy machinery industry in which work shifts exceed 43 hours a week. In total, 79 million children performed these tasks.

Regarding the most affected areas, it stands out the sub-Saharan Africa region, in which 16.6 million children were forced to work since 2016. These statistics are explained by the increase in the population, which overlaps with permanent crises, extreme poverty and lack of social protection.

Meanwhile, as the situation is exacerbated by the pandemic, today’s data could be even worse, with children forced to spend more hours and under deteriorating conditions.