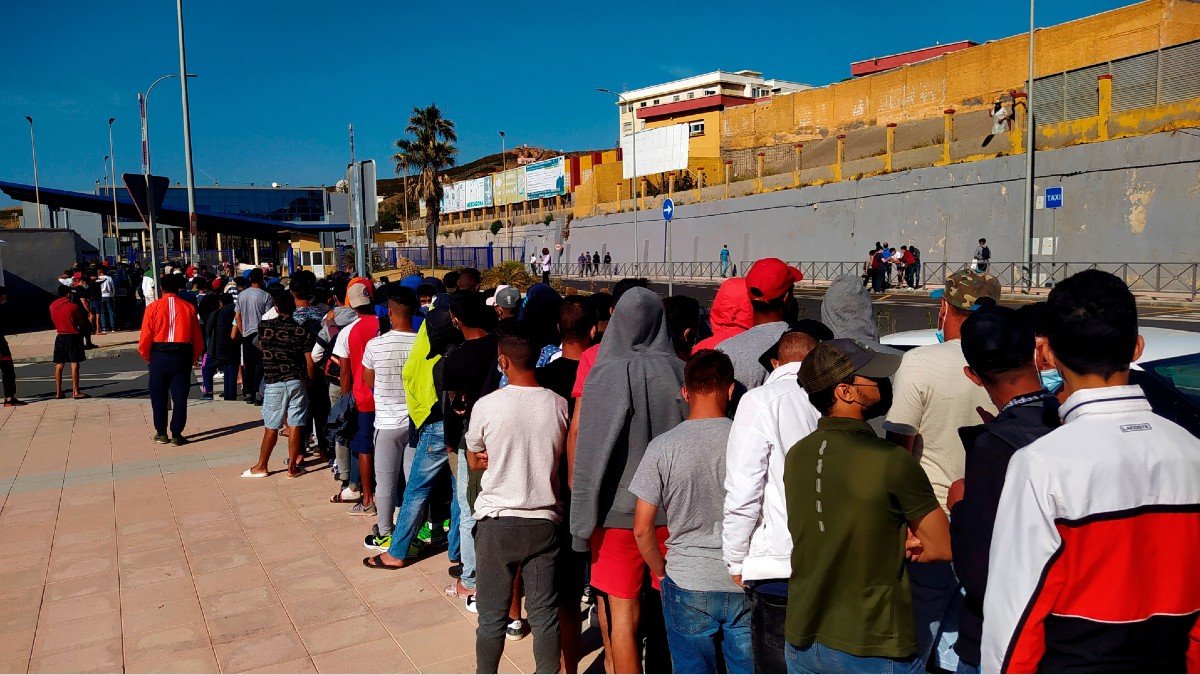 Up to 1,200 Moroccans have already left Ceuta after requesting asylum after the assault on the fence

The month of May saw the largest entry of illegal immigrants in a single day into Spain through the land border that separates Morocco of Spanish territory through the fence of Tarajal beach in Ceuta. Five months later, police sources calibrate for OKDIARIO the consequences for Spain and the rest of Europe of a crisis that is a direct consequence of the diplomatic management of the dismissed Foreign Minister Arancha González Laya. The former minister allowed the temporary asylum of the leader of the Polisario Front in Spain behind the back of Morocco. From those muds these sludge: since May, 1,200 of the Moroccans who stormed the border fence with the acquiescence of the Moroccan police are no longer in Ceuta because after requesting asylum they were able to leave the autonomous city for the Peninsula or other European countries.

“The situation is much calmer, that’s obvious, but people keep coming here every day. Swimming, in boats or trying to jump ”, police sources explain to OKDIARIO. This tranquility It is logical after the madness that has been experienced in the streets of the city since May, with thousands of people, many of them very young minors, escaping from border police control and hiding everywhere in every corner of Ceuta . Little by little, as the Police and the Army returned to control the border, efforts were made to find these people.

The minors were welcomed, rather crowded, by hundreds in industrial warehouses. Their situation has improved a lot, but even today Ceuta insists on the need to return the 700 ore that it has sheltered to Morocco. But the situation is stuck. And the illegal adults scattered around the city? Most chose to hide and live in the parks of the city, but a real possibility of leaving Ceuta soon opened up for them. The autonomous city is a terrible destination for illegal immigration because it is what is often known as a sack ass: Where do you go after arriving in Ceuta? Sneaking into the trucks that board the ferries is usually the only way out of the autonomous city.

However, in this new crisis a new possibility was opened: the request for asylum in Spain. Police mechanisms have generally worked to differentiate genuine from false asylum applications. Asylum seekers must argue that their life is in danger in their country of origin because of their religion, ideology or sexual condition. In a simple interview, police officers trained for this type of situation are able to detect unjustified requests with some ease. Issue settled. Up to now.

Until recently, Ceuta and Melilla enjoyed a differentiation with respect to the rest of the Spanish geography. Namely. If a foreign person requests asylum in Spain and does so, for example, in Valencia, when their request is answered they are asked for contact information, an address in Spain and they are documented so that they can move freely through our country until their request be resolved. If he is denied asylum, he is located or searched and a file is opened for him to return to his country. This was valid for the entire national territory except for Ceuta and Melilla, where the authorization was to stay in the autonomous cities, but not to be able to leave them. Well, a recent ruling has changed that.

“The asylum seeker in the autonomous city of Ceuta (or in another case, Melilla), admitted for processing his application, has the right to free movement in Spain (with the obligation to communicate changes of address) and, consequently, is not according to the law, the registration that limits the validity of the documentation proving your condition as an applicant for international protection, to Ceuta (or in another case, Melilla) ”.

It is the response of the Supreme Court to one of the appeals presented by the Spanish Commission for Refugee Aid, CEAR. The direct consequence of that ruling was that the Ceuta asylum application processing office has been flooded for months with applications from the new inhabitants of the city as a result of the jump to the fence in May. According to police sources consulted by OKDIARIO, 1,600 people have applied for asylum in Ceuta and of them about 1,200 have obtained it. With the new sentence in hand, 1,200 people are free to leave Ceuta for the Peninsula or the rest of Europe.