Uruguay, faced with “the great opportunity” to be a responsible food producer 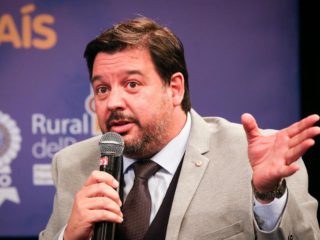 Montevideo, Sep 14 (EFE) .- Uruguay has “a great opportunity” to distinguish itself “as a responsible food producer” that incorporates an environmental division in national production systems, the country’s Minister of the Environment, Adrián Peña, highlighted on Tuesday.

The statements of who heads the environmental portfolio were given during the discussion “Uruguay, A different country? The challenges of sustainability”, organized by the National Institute for Agricultural Research and in which the ministers of Economy and Finance, Azucena, also participated. Arbeleche, and of Livestock, Agriculture and Fishing, Fernando Mattos.

For Peña, a “paradigm shift” is necessary with a long-term strategy that allows transforming the productive country “into an environmentally responsible one” and for this it is necessary to have scientific and technical studies that demonstrate how Uruguay produces.

As noted during the event that took place at the Expo Prado, the main agro-industrial and livestock fair in the South American country, 90% of Uruguayan meat is produced with natural pastures, which generates a lower environmental impact.

Regarding the situation of the climate crisis, Peña emphasized that Uruguay “is a great victim” since many countries that today point to the country for these issues “at the time were not responsible.”

For his part, Arbeleche considered that the country is “at a turning point” of economic recovery and therefore it is necessary to take advantage of the opportunities.

“What the consumer asks for in food, textiles, are elements that the markets ask of us, investors are also asking for them. The whole world today demands from the traditional additional elements that have to do with environmental, social and governance”, the minister reflected.

In addition, he emphasized that the environmental approach “is much more” than mere government financing, but rather is “a seal of quality” that the world demands.

For this reason, Arbeleche said that they are designing the issuance of a bond whose interest rate “is linked to an internationally recognized indicator”, which would imply that in order to obtain benefits, certain environmental parameters must be met.