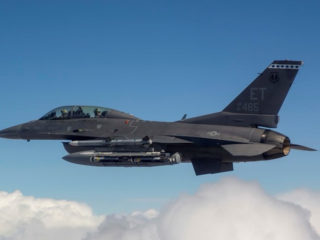 The US Air Force has completed the first phase of testing its Golden Horde (“Golden Horde”) smart ‘collaborative’ munitions that swarm semi-autonomously and use algorithms to search for high-priority targets. Defense News.

According to the report, for the first time six Collaborative Small Diameter Bombs (CSDB) were tested at the same time, the same ones that were launched from two F-16 fighters of the 96th test wing at the Eglin base, in the state. from Florida.

The CSDB bombs established a link with each other and with a ground station to successfully achieve the first objective: to connect the six munitions using a radio network, after previous tests with two and four bombs.

During the next step, updated target information was transmitted to the CSDB swarm from the ground station. As a result, two bombs simultaneously destroyed one target, while two more ordnance hit a pair of different targets.

To carry out the second phase, the US Air Force sent the data to the swarm of CSDBs already in flight, ordering them to abandon their current trajectory and redirect themselves towards the new target.

The idea of ​​the Golden Horde is to create a set of interconnected bombs, which have folding wings and can travel 75 kilometers. The idea is that during the flight they exchange data and decide if there are more appropriate targets for the attack.

But this technology will not immediately translate into a program, said Gen. Arnold Bunch, who heads the Air Force Materiel Command. Instead, his department is willing to conduct virtual experiments with collaborative munitions to decide which aspects of Golden Horde require further improvement.

“There may be certain elements of what we find in Golden Horde that we can extract and implement in another weapon or in another system,” the military explained.