US and Germany end dispute over Russian gas pipeline 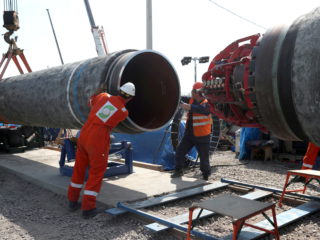 After years of open confrontation between the United States and Germany over the Nord Stream 2 gas pipeline that will link Russia and Germany through the Baltic Sea, tensions have eased. The Joe Biden Administration has reached an agreement with Germany to stop opposing the controversial gas pipeline, as confirmed yesterday by the US Undersecretary of State, Victoria Nuland. For its part, Berlin reported yesterday a telephone conversation between Chancellor Angela Merkel and Russian President Vladimir Putin to address the issue.

As soon as the agreement between Washington and Berlin was known, the Minister of Foreign Affairs of Ukraine, Dmytro Kuleba, has declared that the gas pipeline creates a political crisis in Europe and that both his country and Poland will work together to oppose it. Through his Twitter account, Kuleba reported that “Ukraine officially starts consultations with the European Commission and Germany on NS2, which threatens Ukraine’s security and violates the principle of diversification of the EU Energy group. Communiqués have already been sent to both Brussels and Berlin ”.

In a joint statement by the US and Germany, both countries say they are willing to support “Ukraine’s sovereignty, its territorial integrity and independence, as well as having chosen the European route” to seal this struggle. “We pledge today to confront and stop any Russian aggression or harmful activities against Ukraine.” Both countries have agreed to hit Russia with sanctions and other tools if the Kremlin does not comply. The agreement reached is designed to “ensure that Russia does not misuse the gas pipeline, including Nord Stream 2, to achieve political gains by using energy as a weapon,” says the statement sent by the US State Department.

Biden thus gives a 180 degree turn to the position held by the last two US presidents, opposed to Russia increasing its energy influence on the continent. The project has not only caused discomfort among some members of the EU, but has also caused a headache for the White House, which has imposed sanctions against the companies that have participated in the construction of the gas pipeline, which is scheduled to end end of the year.

Nord Stream 2 is a 1,200-kilometer-long gas pipeline that will carry gas from the Russian Arctic to Germany under the Baltic Sea, of which 2% of the $ 11 billion cost of the project remains to be completed. It is an alternative to the current gas pipelines that cross Ukraine and through which the country receives income as a gas transit country. Much of Russian gas now reaches the EU via Ukraine. Being able to bypass this country, there is fear that Moscow will decide to cut gas to Kiev due to conflict or interest.

As reported by Nuland, Germany has pledged to take action against Russia and back possible actions in the European Union should Moscow seek to use energy as a strategic weapon or take aggressive action against Kiev, such as shutting off gas supplies, something that it has already happened in the past. The objective will be “to limit Russian export capacities in the energy sector”, as well as sanctions against Moscow, according to Nuland. The undersecretary also announced that Berlin will have to guarantee a 10-year extension for the current agreement between Kiev and Moscow on gas transit that expires in 2024.

According to State Department sources, the Biden Administration remains reluctant about the project for fear that it will increase European dependence on Russian natural gas and Moscow could then use it to blackmail US allies. But Biden has ended up giving up on imposing sanctions to block the project, believing that it was too late and that it is better to bet on cooperation with Germany, favorable to Nord Stream 2.

“Germany has committed in this agreement with us, among other things, that if Russia tries to use energy as a weapon or initiate further acts of aggression against Ukraine, Germany will react as a country, in addition to pressuring the EU to adopt measures. effective, including sanctions, to limit Russian export capacity on the energy sector, “said Nuland.

As reported by White House press secretary Jen Psaki, Biden asked his diplomacy to work with his German counterparts to complete an agreement. The American fear of the gas pipeline was justified, in part, by the weak position in which the agreement leaves Ukraine, facing Moscow since in March 2014 it annexed the Ukrainian peninsula of Crimea and instigated the rebel guerrillas in the East of the country.

According to the newspaper The Wall Street Journal, The announcement of the deal, which would have been closed during German Chancellor Angela Merkel’s recent visit to Biden in Washington, has been delayed so as not to overshadow Merkel’s last official trip before leaving the German government in September. Always according to the newspaper, Merkel has endorsed the pipeline as one of the great achievements of her mandate. The project, however, faces significant opposition both in the German Parliament and in the US Congress and among various EU partners, especially in the East.

Since the project was launched in 2015, the Nord Stream 2 has been mired in controversy. Then, the gas giant controlled by the Russian state Gazprom, and five European energy companies created a consortium to build a new gas pipeline under the Baltic. Nord Stream 2 was hatched when the Social Democrat Gerhard Schröder left the German Chancellery and became an advisor to Gazprom. The new gas pipeline will now allow the Russian giant to deliver 55,000 million cubic meters of gas to Europe every year through 2,460 kilometers of pipes that cover the more than 1,200 kilometers from Russia’s Ust-Luga to Lubmin – a small town very close to the city ​​of Greifswald—, in Germany.