US congressman proposes to establish a tax on space tourism 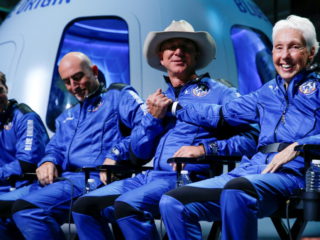 On the same day that American billionaire Jeff Bezos successfully completed a suborbital flight aboard the New Shepard, a rocket manufactured by his aerospace company Blue Origin, a Democratic congressman proposed imposing a tax on commercial space travel.

Earl Blumenauer, Representative in the US House for the State of Oregon, express this Tuesday in a statement his concern about environmental impact of the nascent space tourism industry. In his view, wealthy people who use these services should also pay taxes.

“Space exploration is not a tax-free vacation for the rich. Just like normal Americans pay taxes when they buy airline tickets, billionaires who fly into space without producing anything of scientific value should do the same, and more.” Blumenauer noted.

After clarifying that he is not opposed to this type of spatial innovation, the Democratic congressman stated that non-scientific activities and that they are made for the purpose of mere entertainment should “support the public good.”

What Blumenauer proposes in his bill, called the Carbon Protection Tax Act (Space), is to charge a fee per passenger on the price of the ticket and other taxes, which will be calculated based on the altitude the ship reaches. For its part, NASA research flights would be exempt.

The proposal comes amid strong criticism of Bezos, who has been accused for years of not paying the taxes he owes in line with his income. The tycoon also sparked controversy by thanking the Amazon employees and customers for “paying” and make your short trip to space possible.

In the unexpected event it passes, Blumenauer’s proposed new law could be a major source of revenue for the state, as the space initiatives of billionaires Jeff Bezos, Richard Branson and Elon Musk unfold successfully.