US consumer prices show the smallest rise in seven months 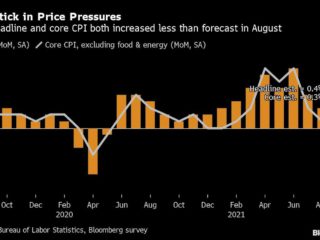 (Bloomberg) – Prices paid by US consumers rose less than expected in August, posting the smallest rise in seven months, suggesting that some of the upward pressure on inflation is beginning to ease.

The consumer price index rose 0.3% from July, according to Labor Department data released Tuesday. Compared to a year ago, the CPI rose 5.3%. Excluding volatile food and energy components, so-called core inflation increased 0.1% from the previous month, the smallest increase since February.

Economists surveyed by Bloomberg estimated a 0.4% increase in the headline CPI from the previous month and a 5.3% rise from a year earlier, according to median estimates.

Treasuries reduced their declines after the data, while the dollar fell and S&P 500 futures advanced.

Faced with mounting cost pressures as a result of material shortages, transportation bottlenecks, and contracting difficulties, companies have been increasing the prices of consumer goods and services. While the price hikes associated with the reopening of the economy are beginning to ease, weak supply chains could continue well into 2022 and keep inflation high.

A survey by the Federal Reserve Bank of New York showed on Monday that consumers expect 4% inflation over the next three years, the highest in data since mid-2013.

The CPI data precedes the Federal Open Market Committee (FOMC) meeting next week, where Fed officials will discuss how and when they will begin to reduce asset purchases. Fed Chairman Jerome Powell said last month that the central bank could start reducing its monthly bond purchases this year, but did not give a specific deadline.

The figures could also help mitigate criticism from Republicans that President Joe Biden’s economic stimulus is causing damaging inflation as he tries to sell a $ 3.5 trillion long-term tax and spending package that also faces opposition from moderate Democrats.

Parts shortages that have raised input costs are restricting production. In the most recent week, Toyota Motor Corp. and 3M Co. downgraded their outlook for car production due to a shortage of semiconductors, while Nestlé said it is introducing even higher price hikes amid rising product costs. basic and transportation.