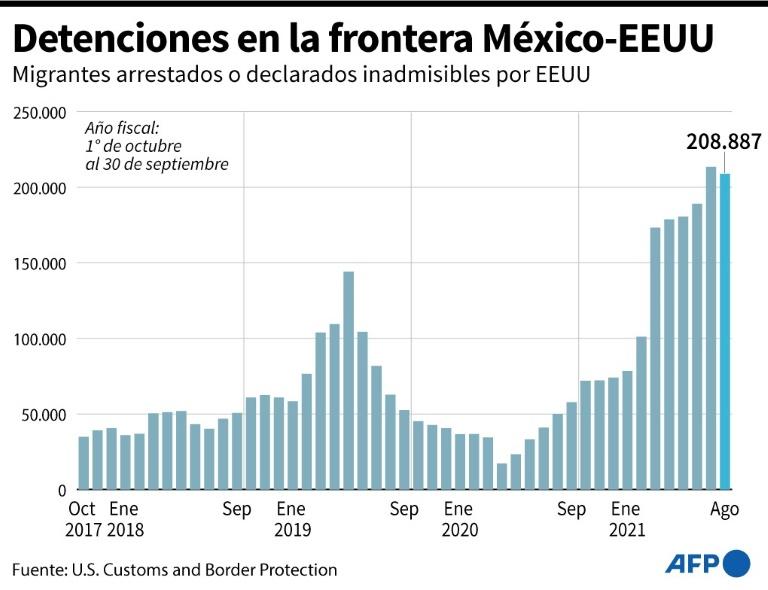 US to increase “deportation flights” for immigrants stranded in Texas

The United States will increase the number and capacity of “deportation flights” for thousands of immigrants in the Texas border city of Del Rio (south), the Department of Homeland Security reported this Saturday.

Some 14,800 migrants, mostly from Haiti, are camped under a bridge on the southern border of the United States, a humanitarian crisis that puts the Joe Biden government in trouble.

The migrants are in an area controlled by customs and border authorities, which deployed an additional 400 troops to try to contain the crisis and “improve control of the area,” according to a statement from the Department of Homeland Security.

The authorities indicated that they will add “additional transportation to accelerate the pace (of flights) and increase the capacity” of transfer “to Haiti and other destinations in the next 72 hours.”

They were already carrying out “expulsions and flights to Haiti, Mexico and Ecuador, as well as (to) the countries of the northern triangle” of Central America, Honduras, El Salvador and Guatemala, they added.

These migrants arrived in the small town of Del Rio, Texas, crossing the Rio Grande that separates the United States from Mexico. Of the 2,000 that were at the beginning of the week, the number rose to 14,800 on Saturday, according to Bruno Lozano, the mayor of this town bordering Mexico’s Ciudad Acuña.

On Friday, the Democratic mayor, who is expecting thousands more arrivals, declared a state of emergency and closed the bridge to traffic.

“Extreme circumstances call for extreme responses,” he told the Texas Tribune. “There are women who give birth, people who faint from the temperature, they are a bit aggressive and that is normal after all these hot days,” he remarked.

On Saturday, the local leader explained that he receives more financial means to deal with the crisis.